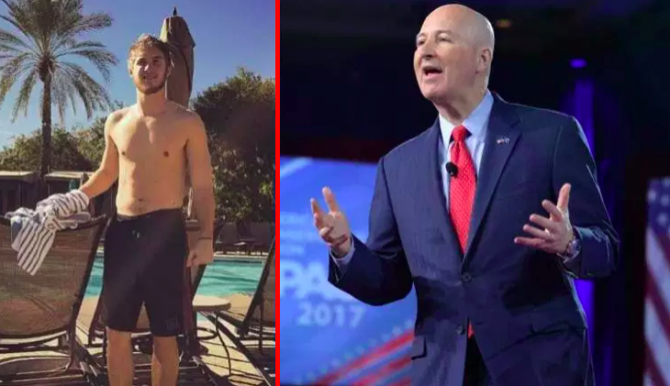 A former campaign staffer for Gov. Pete Ricketts of Nebraska has been outed for making racist and homophobic comments in an online chat forum while he was working for the governor’s re-election campaign.

Like most online trolls, Bressman made the remarks anonymously. They were posted in a forum for fans of the YouTube show “America First,” hosted by right-wing extremist and white nationalist Nicholas Fuentes.

Some of Bressman’s comments included things like “gays are the scum of the earth” and admitting to throwing eggs at an LGBTQ rally. He also openly fantasized about throwing hand grenades into Pride parades.

In another post, he confessed that he would like to “run over a (Black Lives Matter) supporter if they were in the street” but, he added, “i have a nice car and it’s white are the downsides but I think (I) probably would for the (laughs).”

In another, he said that he enjoys conservative radio personality Michael Savage “even though he’s a Jew”.

And in yet another, he proclaimed “my whole political ideology revolves around harming journalists.”

Since being outed as a trash human, Bressman, who remained on Ricketts’ campaign payroll until December 2018, has apologized and said he wrote the comments off the clock and without the knowledge of anyone with the GOP or Ricketts’ campaign.

Meanwhile, in a statement issued this week, Ricketts, who opposes same-sex marriage despite having a lesbian sister, said he was “shocked and horrified” to learn Bressman was such a disgusting person.

“I am shocked and horrified to learn that this former staffer made these statements and I had no idea he harbored these feelings,” he said. “He never expressed these views to me. I condemn these statements and this hateful worldview, which do not reflect my beliefs or the beliefs of Nebraskans.”

But Nebraska Democratic Party Chair Jane Kleeb says she’s not surprised by any of it.

“Hate seems to be a family value for Ricketts,” Kleeb said in a statement. “First is was Pete Ricketts’ dad who sent emails that included racist comments while he looked the other way on most. Now, a staff member sent racist messages and was told to take one message down but that did not stop Bressman.”

She added, “He kept his job for months and kept spewing hate. Obvious questions now linger. Did the campaign take money or coordinate with other white nationalists groups?”