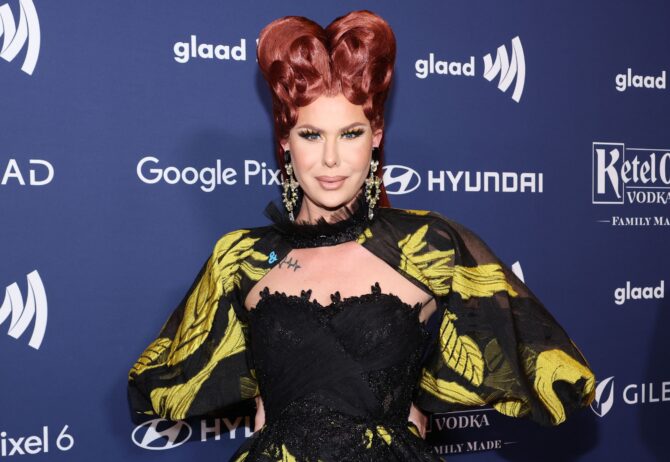 All aboard! Trinity The Train is leaving the station. Next stop: Drag Race herstory.

After sewing up a win for this week’s Maxi Challenge, Ms. The Tuck has further solidified her title as the show’s winning-est queen, racking up 10 across her original run on Season 9, All Stars 4, and the current all-winners iteration. For those who love track records, she came into All Stars 7 tied with BenDeLaCreme and Manila Luzon for seven wins across the franchise each, but now she’s got three more under her belt—and the season’s not over yet!

The stats are just a cherry on top of what was ultimately a showcase episode for this showgirl. In “Legendary Legend Looks,” Trinity once again flaunted her lightning-fast needlework, reimagining RuPaul’s baby blue Season 8 promo look with an eye for detail and glamour, earning her second star. And, in the lip-sync, she came out on top by “getting to the bottom” of Jaida Essence Hall, proving why she’s one of the most reliably entertaining performers to hit the main stage.

But where Trinity shined the brightest this week was in the Werk Room, where she took the time to help both Shea Couleé and Monét X Change bring their looks together. In a season of sisterhood, she’s stood out as the true drag mother of the cast, always there to nurture, support, and lend a helping hand.

In our recent conversation with Trinity, she opened up about the inspiration behind her own motherly instincts, shared what was going through her head during that lip-sync moment, and shared why nothing is secret on the Drag Race set. (Hint: It’s because Jinkx Monsoon can’t mind her own business.)

Queerty: Since you’re an official Drag Race legend, it’s only fitting that Hollywood will make a biopic about you one day. Who would you cast to play yourself and why?

Trinity The Tuck: Who would I cast to play myself? Oh, goodness, I would probably have to cast The Vivienne—she does a really great impersonation of me. [Laughs.]

And we did get a taste of that in Untucked this week.

Yeah, yes we did. It’s kind of uncanny. I live! I mean, if you saw us side-by-side, you would think it’s a spitting image.

Now, are we talking full silhouette? Like, does the Viv have the backside to match?

Well, I think what I have in my *ss, she makes up for in her cheeks. So she’d be great.

Oh, absolutely. There’s an Academy Award in her future.

But speaking of cheeks, the lip-sync this week was fierce, and you got to do something that so many people have been dying to do: Slide right into Jaida’s butt. Do you remember what was going through your head in that instant?

You know, I was just lip-syncing and in that moment, I was like, “I’m going to slide across the floor.” But I didn’t realize the fabric choice of my bodysuit would be so slick on the stage, and I just kept going and going, and then just face-planted right into Jaida’s *ss. I mean, after being locked down for so long, I’m sure she enjoyed it.

All season long we’ve been talking about Trinity The Train, but this episode, this challenge felt like a great showcase for Trinity The Mom. You’re such a nurturing presence in the Werk Room, and so helpful to your fellow queens. Where does that instinct come from?

I definitely take a lot after my grandmother. She is very old school, she instilled a lot of ethics and morals in me. And I kind of filtered through a lot of that because she was very religious, so a lot of that didn’t align with my beliefs completely. But I do believe what she instilled in me was to be a good person, to be helpful, to be kind, to be strong. All those things I feel like are because of her. And that’s why I feel like I am the person that I am.

With that in mind, is there a specific challenge throughout your seasons on the show that you wish you would’ve had some help with?

You know what? No, I feel like I’m a person—and this kind of cliche—I feel like everything happens for a reason. I feel like the challenges that I’ve went through, that I was not as successful as I would have liked to have been, were learning experiences and have only made me better. And that is why I have been able to tackle the challenges the way I have this season, compared to before. So, if someone helped me and did it for me, maybe I wouldn’t have learned the lessons that I did to prepare me for now.

That’s true! And as this design challenge solidified, you’re the queen with the most Maxi Challenge wins across the franchise—this was your 10th win!

We love a winning-est queen! [Laughs.]

One of the funniest ongoing narratives of this season is your ongoing alliance with Monét X Change, but I have to know: Is it even possible to whisper in that Werk Room without everyone hearing it?

Apparently not because Jinkx just pops up out of nowhere, b*tch! [Laughs.] She is really trying to get the tea. I’m like, “Are you sure you’re not part of this alliance? Because you sure are involved!”

Related: Monét X Change dishes on All Stars 7: ‘If The Vivienne is reading this, you better watch out’

So what’s the secret to telling secrets without letting everyone know what’s going on? I mean, does everyone just glance over every time two queens are talking off to the side?

Oh yeah, yes! But, at the same time, all the girls break off into their little groups and kiki. So, at least for me, I didn’t feel like it was anything too suspicious. You know, I did the same with other girls—like, I would break off and have conversations with everyone. But I think that, for storyline purposes, you get to specifically see our conversations more than mine with someone else.

That makes sense. And so Jinx just knows that’s where the camera’s going to be and can’t help herself, right?

As the first queen to get blocked this season, you know better than anyone the secret power of the Platinum Plunger. Did receiving that right out of the gate change your approach to the game?

Well, you know, no one wants to get blocked but being blocked first, specifically, let me know that these girls think I’m a threat. And rightfully so! As they should. But, clearly, it cost me a star!

Outside of your all-stars 4 crowning, when was the first time in your career that you’d say that you felt like a winner? What did that moment mean to you?

I feel like [it was] when I won National Entertainer Of The Year, which was my first major pageant that I won. Alyssa Edwards was my first runner-up, Eureka was my second runner-up. I won every single category—except for one category—and I felt like that was the beginning of the snowball of the competitor that I became, and so that’s really where it all started for me.