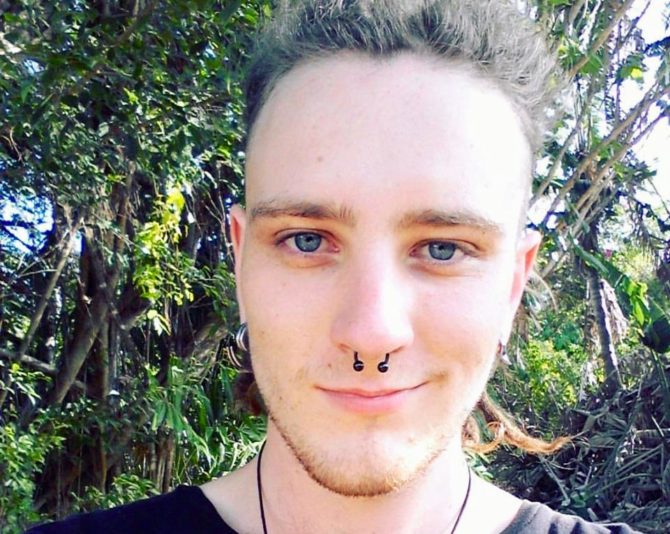 Renon Schafer is an entrepreneur in every sense of the word.

Schafer is a sex worker from Queensland. He started turning tricks in college in exchange for classmates doing his homework but quickly learned he could make actual money for it.

“I had already been doing different types of opportunistic sex work, and when I moved to Brisbane I was struggling to find work and I was quite poor and I just decided one day on Grindr to just put Escort Services,” he explains.

Schafer now runs his business out of his house in the suburbs, where he has a special room equipped with a mattress, decorative bedspread, purple filtered mood lights, and a small bathroom.

“I’ve got various types of bondage equipment, including ropes, there’s wrist cuffs, ankle cuffs, stuff that I can use to hog tie–that’s where wrists and ankles are both bound together behind the back,” he says.

Schafer is also a spokesman for Respect, an advocacy group for sex workers focused on improving laws that protect sex work.

“Private workers in Queensland cannot work together,” he explains. “That would be classified as an illegal brothel. That means that we cannot cost share, we cannot support each other, we can’t be there for each other’s safety.”

He continues, “We are not really allowed to message other sex workers about our current location, or our activities, which is a safety strategy that has traditionally been used by sex workers for decades.”

Related: Some of these people happen to be sex workers. Can you guess which ones?

On top of that, he says, sex workers can’t really go to police for help. They also have trouble getting bodyguards or life insurance.

“There’s a lot of those sort of really small, day-to-day things that we don’t have access to,” he says. “There’s also the social isolation aspect of things where because there is such a stigma against sex work, that it can be quite dangerous and scary to out yourself as a worker.”

Schafer says he hopes his efforts to raise awareness to his line or work and the dangers he and other sex workers face on a daily basis will help open people’s minds.