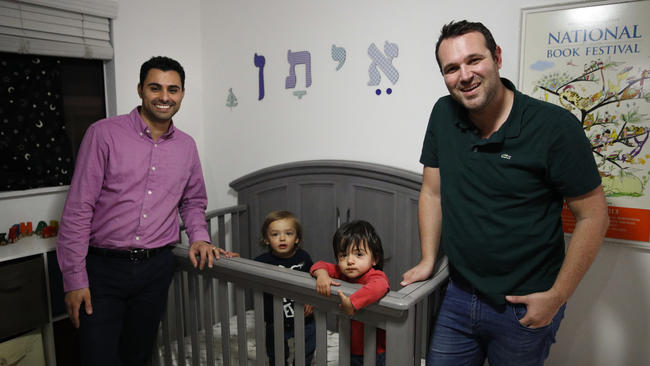 This is just awful.

A gay couple is suing the U.S. State Department after one of their twins was denied American citizenship, even though one of his fathers is a U.S. citizen.

16-month-old Ethan Dvash-Banks has been living in the country legally on a tourist visa… At least, until last month, when his visa expired. Meanwhile, his twin brother, Aiden, has a U.S. passport.

The boys’ fathers, Elad and Andrew Dvash-Banks, were married in Toronto in 2010. Elad is Israeli; Andrew is American. They moved to Los Angeles a few years later after DOMA was struck down and their Canadian marriage certificate was recognized by the U.S. government. At that time, Andrew sponsored Elad for a green card.

When they decided to start a family, they knew they wanted twins. Through the miracle of modern medicine, they worked it out so that each of them would father one of the children. The twins were born in Canada via a surrogate in 2016. Ethan’s biological father is Elad; Aiden’s dad is Andrew. Both men are listed on both children’s birth certificates.

The State Department forced the family to undergo DNA testing. Upon learning Ethan’s father isn’t a U.S. citizen, officials determined the infant “has no grounds for citizenship” since he has no biological connection to any U.S. citizen.

“It was an awful moment for our whole family,” Andrew told the Associated Press.

The couple connected with Immigration Equality, an LGBTQ advocacy nonprofit, and filed a lawsuit Monday accusing the State Department of discriminating against same-sex binational couples.

“If a mother and father walk into a consulate and have a marriage certificate and birth certificate, they’re never asked any questions about the biology of the child,” Aaron Morris, executive director of the organization said. “But the converse is also true and every same-sex couple will be asked that.”

The couple says they are hopeful about the outcome.

“I think what we’re doing right now fixes something that is not fair and fighting for what’s right,” Elad said.

Related: Kids Of Gay Dads Are Perfectly Well-Adjusted, Thank You Very Much