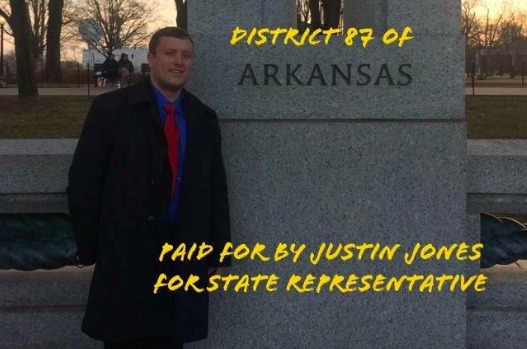 Meet Justin Jones. He’s an outspoken Libertarian currently running for an Arkansas House seat who has evidently made “f*gs are disgusting” his new campaign slogan.

In a Facebook post written earlier this week, Jones attacked Hawaii resident Myah Baeza for offering sympathy for a gay friend who couldn’t donate blood because of discriminatory laws.

“My blood is too gay to save a life,” Baeza wrote. “This is such an antiquated rule and it disgusts me. Women can have AIDS, too, and they search for it anyways?”

For whatever reason, Jones felt the need to comment on the post, writing, “The likelihood of a f*g catching HIV is 1000% more likely then any straight person.”

To which Baeza replied, “Why in God’s name would you say that?”

But he didn’t stop there. Jones continued:

If you don’t think HIV is created by homosexuality then you need education. That’s the entirety of my post, for someone who wants free speech, you don’t act like it. I shouldn’t have said ‘f*gs’ should have said homosexuals. But I won’t apologize of the moral of my comment, homosexuality is wrong, and shouldn’t be publicly endorsed. 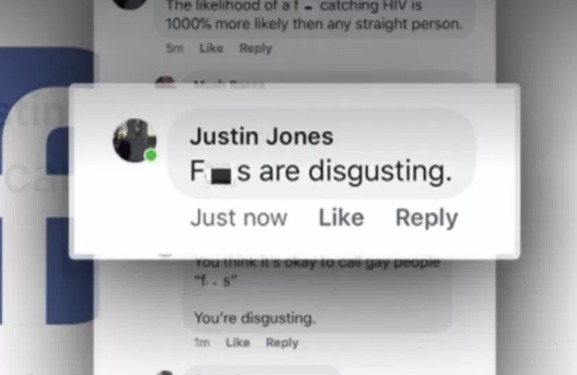 After local station KARK reported on the exchange, Jones issued the following response, which include no shortage of CAPS:

I recently made a comment that was meant to be satire, but had FACTUAL meaning. In the new day of Social Media, we face backlash for every comment we make, which is putting ‘Free Speech’ at a price. The Aids Epidemic is a VERY big part of the LGBTQ Community. To not recognize that would be a ‘Lie’ to yourself and the LGBTQ Community. In this New Day of politics, we are recognizing the benefits of throwing away the old establishment, and how that didn’t work. Today, we are bringing back ‘FREEDOM OF SPEECH,’ and protecting our 2nd amendment rights. That might be too much for some people, but that’s why we’re getting them out of Public Office. Let’s get back to ‘Making Arkansas Great Again.’ Vote Justin Jones for State Representative, District 87.

When asked what he thought of Jones’ statement, Baeza told the station, “I mean, really all he’s doing is just trying to pull the political move and apologize to try to save his sinking ship, but it’s clear how he feels about gay people.”

“If you have any contempt or hatred in your heart for the people who you might be representing then you probably shouldn’t run for public office.”