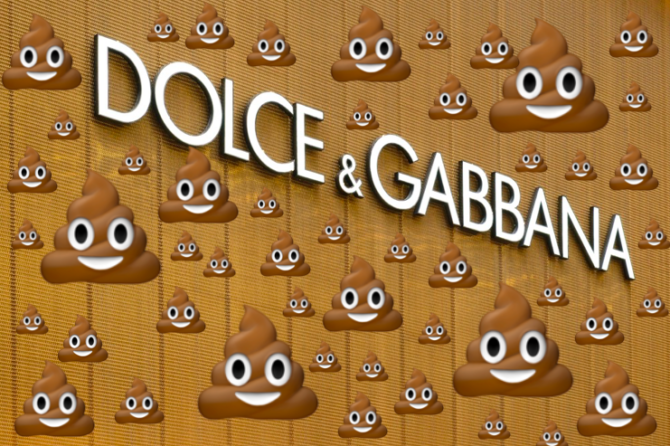 Italian designer Stefano Gabbana of Dolce and Gabbana had some choice words for people who were upset that he dressed Melania Trump for her official White House portrait: “Vai a cagare.”

Also, he thinks everyone is poop.

It all started earlier this week when the heavily airbrushed image of Melania, shot by photographer Régine Mahaux, was unveiled on Monday. Though the White House didn’t mention what brands she was wearing, Stefano Gabbana let it be known that the first lady was sporting one of D&G’s signature jackets by thanking Melania publicly on Instagram:

#DGWoman BEAUTIFUL ????? #melaniatrump Thank you ????? #madeinitaly?? Thanks to all those who appreciate our work ?

The post has received over 16,000 likes and 2,400 comments. But not all of them were complimentary.

One commentator told Gabbana that he had lost a follower, to which Gabbana replied, “I don’t care!! Really!”

Another labeled the photo “#NAZISTA” (Italian for Nazi), to which the designer responded by posting laughing face and poop emojis:

To third person called the photo “disgusting,” and that’s when Gabbana told the person to “vai a cagare.” (“Go to hell”/”f*ck off”)

Of course, this isn’t the first time the Italian design duo has come under fire for its inflammatory statements. In 2015, D&G prompted an international outcry when they questioned why gay people would ever want to have children, then called IVF babies “synthetic.” They later issued an apology.

For some reason we don’t think there will be any saying sorry this time around.