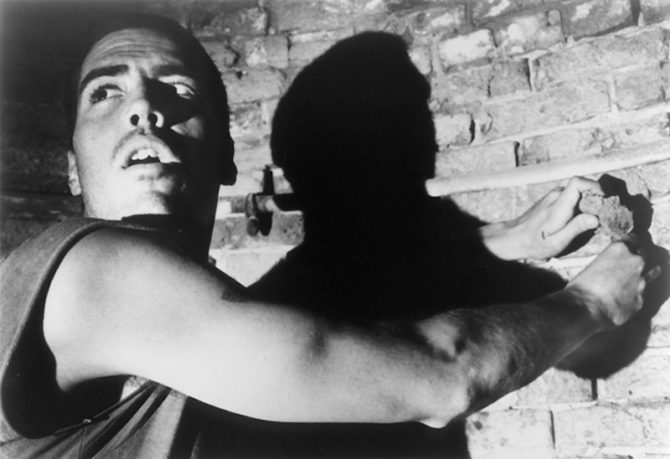 Can both be true?

Describing the plot of Poison isn’t easy: the film is a triptych, telling three different stories vaguely connected through themes and style. Hero follows a seven-year-old boy that murders his abusive father, told in the style of Hard Copy-type tabloid journalism. Horror borrows from 1950s b-movies, telling the story of a mad scientist obsessed with an elixir of human sexuality. Homo tells a prison love story that would make the characters in The Prince blush. Haynes weaves these three stories together, allowing them to comment on one another, sometimes with humor, others, with despair. The sum result is a film about the pain of growing up queer and the dangers & ecstasy of gay sex and love.

Still powerful almost 30 years later, Poison would have struck a particular chord with LGBTQ audiences in 1991 at the height of homophobia and the AIDS epidemic. Maybe because of recent political developments, the film feels oh-so-appropriate now, with the forces of hatred again on the attack. Strange how the man that made Poison would go on to make tender love stories and mainstream dramas such as Carol, Far From Heaven and Dark Waters. Much like making sense of Poison’s plot, it seems impossible to reconcile. And like Poison, when viewed together as a whole, it all makes perfect sense.