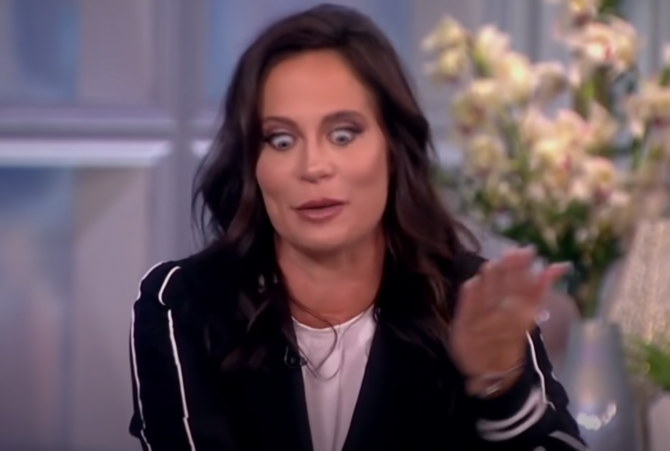 Former Trump spokesperson Stephanie Grisham continued her book/rehabilitation tour this week by appearing as a co-host on The View.

During a conversation yesterday about Florida’s homophobic “Don’t Say Gay” bill, which is currently on its way to Gov. Ron DeSantis’ desk, Grisham mentioned that her teenage son recently came out as gay and that he once told her he was “ashamed” that she worked for Donald Trump.

“This one is personal to me,” she said during the roundtable discussion. “And you bring up a good point because of my former boss. I have a 14-year-old son who is gay, recently came out as gay. I have his permission to talk about this.”

Stephanie Grisham's newly out gay son was embarrassed about where she worked and her associations with the Republican Party ???#TheView #DontSayGay pic.twitter.com/qWdVtkEW09

Grisham went on to say that the “Don’t Say Gay” bill is “making children feel different” and “creating a problem” where one didn’t previously exist.

While we can never have enough allies, something about Grisham’s sudden concern for LGBTQ youth feels as authentic as her pumped-up lips and wrinkle-free forehead. It’s almost like she’s playing the gay son card to try and excuse the fact that she worked for one of the most homophobic and transphobic administrations in modern presidential history.

I will never feel anything but contempt for any adult who served the orange abortion. They should be ashamed. I hope Grisham’s son finds healthier, stronger adult role models soon. Stephanie Grisham: My Gay Teen Son Was ‘Ashamed’ I Worked for Trump and GOP https://t.co/snmKndryuw

Dear Stephanie Grisham: I'm always willing to have human beings do better, but I am simply not here for your rehabilitation tour. It's too soon. #TheView

Stephanie Grisham trying to separate herself from the T??mps.#TheView pic.twitter.com/HIxptLZh7m

#StephanieGrisham took money from Trump for years and worked to further his anti-gay agenda. But when her son comes out… now it matters to her. https://t.co/RnZlT0lXWo

People like Stephanie Grisham, who knew how horrible Trump was behind the scenes, should have spoken up instead of saving it for a book.

Who else refuses to buy her book??

This Week on #TheView

Stephanie Grisham: "My Son Came Out He is GAY."

Stephanie Grisham didn’t hold one press briefing while she was Press Secretary. Why are you helping her rehabilitate her image? She needs to answer that. #TheView

Stephanie Grisham: I have a gay child and fully support him.

Also Stephanie Grisham: I will only vote for Republicans who continue to pass legislation and discrimination Bills against my gay child. #TheView #LGBTQIA

Remember this BUG-EYED NUT? "Stephanie Grisham"-TRUMP gave her the opportunity of a lifetime. And she BLEW IT. She's BITTER, and boy, she wants revenge on Trump. AND she wants back in the SWAMP. Here she is EXPLOITING her son. She says he's 14, GAY, and a TRUMP HATER. WHO CARES! pic.twitter.com/VtOHBVvaPI