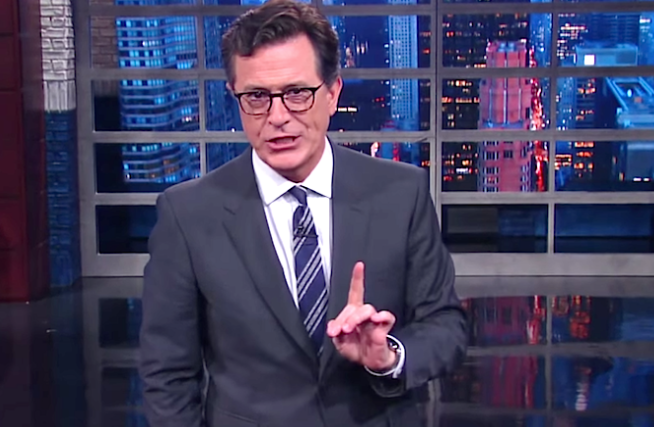 During Wednesday’s Late Show taping, host Stephen Colbert responded to the hullaballoo surrounding a crass joke he made about President Trump’s mouth being Vladimir Putin’s “c*ck holster.” Strong objections came from both the right and the left, the former feeling the joke crossed a line as far as what people should say about a president (as if Trump doesn’t cross far more worrisome lines with shocking regularity, not to mention life and death consequences), and the latter taking offense at gay sex being the butt of a joke.

Colbert made it clear he’d change his language choice if he could, but that jokes at the president’s expense aren’t going to stop anytime soon. He stopped short of tackling the perceived homophobia.

The topic then reportedly came up at the beginning of his interview with out actor Jim Parsons, which you’ll be able to hear more about once the episode airs, or almost certainly tomorrow on countless news sites and self-righteous Facebook status updates.

Until then, you can read his opening monologue remarks below:

Welcome to “The Late Show.” I’m your host, Stephen Colbert.

Still? I am still the host?

Now, if you saw my monologue Monday, you know that I was a little upset at Donald Trump for insulting a friend of mine. So at the end of that monologue I had a few choice insults for the president in return. I don’t regret that. He, I believe, can take care of himself. I have jokes; he has the launch codes. So, it’s a fair fight.

So while I would do it again, I would change a few words that were cruder than they needed to be. I’m not going to repeat the phrase, but I just want to say for the record, life is short, and anyone who expresses their love for another person, in their own way, is to me, an American hero. I think we can all agree on that. I hope even the president and I can agree on that. Nothing else but that.

Below is Monday’s monologue that caused all the commotion. The phrase in question occurs in a bleeped out segment towards the very end: