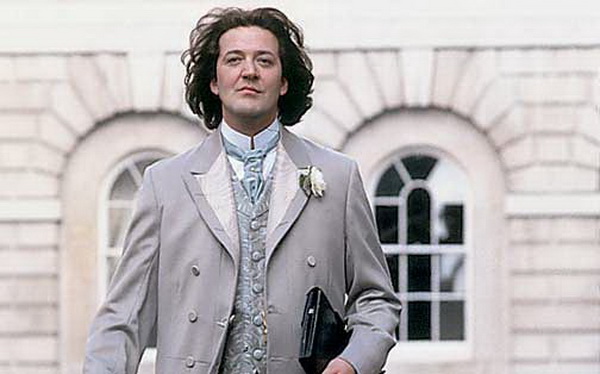 Stephen Fry doesn’t get enough credit. While many of our readers will know him for his essays, activism and wit, the man is also a fine actor, capable of giving an unforgettable performance.

Case in point: Wilde, the 1997 biopic of gay writer Oscar Wilde, in which Fry plays the title role. The movie recalls Wilde’s career as a lecturer and playwright as well as his Cinderella story of growing up middle class only to become the toast of the London elite for his success. After fathering two children with his wife Constance (Jennifer Ehle), Wilde meets Robbie Ross (Michael Sheen) and the two have a brief but passionate affair. Wilde enjoys his newfound homosexuality and success as a married man until he meets Lord Alfred Douglas (Jude Law), a handsome gay aristocrat. The two fall madly in love and begin a tempestuous affair, which eventually leads to Wilde’s famous trial for sexual perversion.

As a film, Wilde has a lot going for it, including sumptuous production design and a cast of soon-to-be stars (Tom Wilkinson, Orlando Bloom and Ioan Gruffudd all have brief roles). The real anchor of it all, however, is Fry who captures Wilde’s own trademark humor and bears a striking resemblance to the real man. He captures so well the man’s passionate affection for Alfred Douglas, as well as Wilde’s increasing worry that Douglas’ cavalier attitude and spoiled habits will eventually lead them both to downfall. Told with love, rage and featuring a magnificent performance from one of the world’s underrated character actors, we say give Wilde a watch. It’s as much a lesson in queer history as a master class of acting by Stephen Fry.