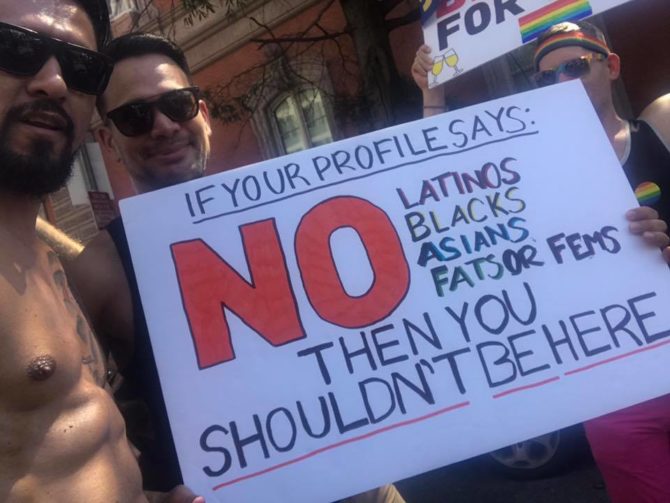 26-year-old Josh from L.A. has a some strong medicine for guys who still refuse to entertain the idea that maybe, just maybe, their “preferences” on Grindr are, in fact, racist.

I realize there is such a thing as preference, but preference is what you’d prefer, it doesn’t rule out other options. I may prefer sushi for dinner, but that doesn’t mean I’m not open to pasta.

“So many people on these apps use the word ‘preference’ to try to mask their prejudices,” he says. But, make no mistake, “letting someone’s race dictate whether you’d date them is racism.”

Josh describes himself as “6 ft, 26, 175, fit, Hispanic and black and I’m often told I have a great smile.” He didn’t come out until he was 23. After doing so, he turned to dating apps to connect with other guys.

He quickly learned that his mixed race was handicap when it came to meeting men.

“There’s an unspoken racial hierarchy [among gay men]” he explains. “I can think back to a few specific examples where I really thought I connected with someone, only to get to the topic of ethnicity and then people just disappear.”

Josh says that one guy told him “You’re really cute but I’m not into black guys.” Another guy asked specifically what race he was. When Josh replied “Puerto Rican and black” the man never responded to another one of his messages.

“I can’t even begin to tell you how many times someone has found out my mix and gone straight for penis size,” he continues. “‘How big are you?’ ‘I bet you’re hung huh?’ ‘I love bottoming for big black guys.”

Fetishizing over someone’s ethnic stereotypes isn’t a turn on. … Not all black men are packing a wrecking machine below the belt. Not all Latino men have sexy Latin accents or even speak Spanish, etc. So save yourself the possible disappointment and stop secluding yourself to one group just to meet your stereotypical expectations.

“The saddest part is that, as a whole, the gay community is still fighting for equality and acceptance, but we can’t even accept each other,” he writes. “[We’re] never going to gain the acceptance we want from the rest of the world if we don’t first learn to accept the people within our community.”

At the end of the day, the person you’re meant to spend the rest of your life with may not be that person who is the same skin color or race as you. It may be the person who is physically the exact opposite of you. Sure, looks matter but they aren’t the whole ballgame.