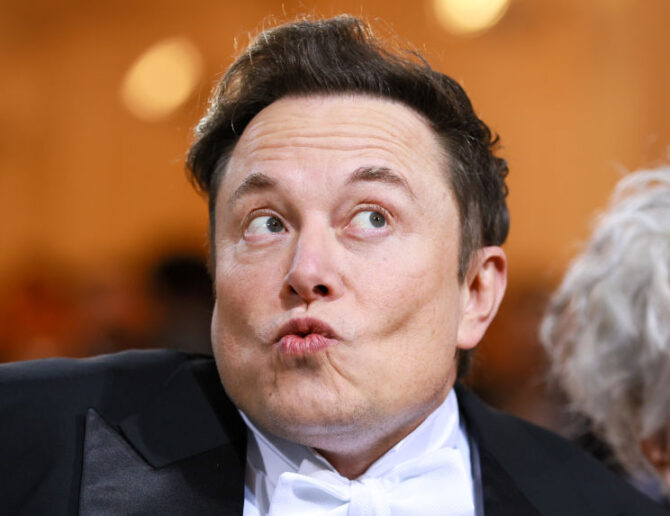 Elon Musk has responded to those shirtless photos of him that have been circulating on Twitter all week.

Related: Shirtless Elon Musk gets hosed down in Mykonos and everyone’s thinking the same thing

The pronoun-hating, apartheid-era emerald mine heir was photographed in his swim trunks being hosed by a musclebound man in Mykonos, Greece over the weekend.

The multibillionaire was with a small group that included newlywed pals Ari Emanuel and Sarah Staudinger as they sailed the Aegean Sea on the “Zeus” — an almost $20,000-per-week motor yacht that can accommodate six guests in over three cabins and comes with a professional crew.

The response to the photos has mostly been one of alarm. Many people were concerned about whether 51-year-old Musk was wearing sunscreen…

Honestly, I just hope he is wearing good sunscreen

when Elon Musk gets undressed pic.twitter.com/IEo8ZB2Y0G

I just want to know where @elonmusk gets his 1,000 SPF sunscreen because I too would like to look like a beluga whale or a cryptid from an ancient underground tomb.

I just showed my daughter why it’s important for people like Elon Musk to wear sunscreen!!
Day one is always fun in the Sun but Day two can be Hell if you are not smart!! pic.twitter.com/xGzxtHwpra

Musk, who is currently being sued by Twitter for not following through with his $44 billion purchase of the social media company, responded to the online chatter by threatening to take off his shirt again.

“Haha damn, maybe I should take off my shirt more often … free the nip!! (already back in the factory btw)” he tweeted in response to someone tagging him in a photo.

Haha damn, maybe I should take off my shirt more often … free the nip!!
(already back in the factory btw)

Musk is no stranger to body shaming other people in public forums, particularly fellow billionaires who he finds threatening.

In April, he trolled Bill Gates by comparing him to the pregnant man emoji, writing: “in case u need to lose a boner fast.”

in case u need to lose a boner fast pic.twitter.com/fcHiaXKCJi

The transphobic tweet quickly went viral after it was shared with Musk’s 101 million followers and still remains up on his page today, even after his own child came out as trans.

Last month, Musk’s 18-year-old daughter, Vivian, petitioned for a name change–first and last–as both part of her transition and to distance herself from the multibillionaire.

According to leaked records from the Los Angeles County Court, she gave the following reason for the change: “Gender Identity and the fact that I no longer live with or wish to be related to my biological father in any way, shape or form.”