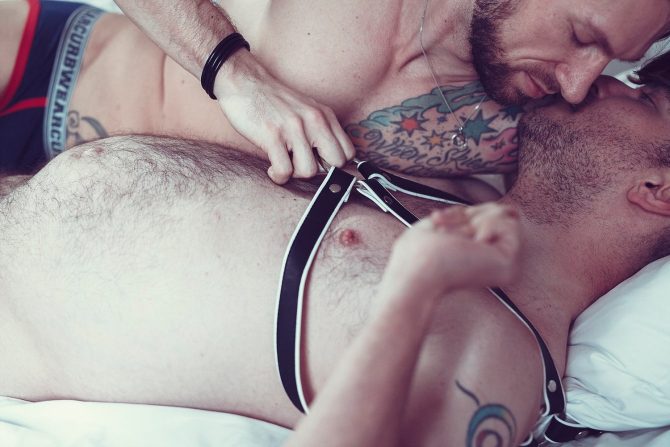 I interviewed Andrew Gurza on a Tuesday, a mere four days after the official release of his first adult film. Andrew was buzzing, to say the least. After all, this was a massive moment for Gurza, a widely-recognized disability advocate with Cerebral Palsy.

A gay adult film starring someone who is disabled? It was poised to make a splash.

And then came Friday.

“Someone on Twitter this morning posted that I had masturbated in front of their friends without their consent,” Gurza wrote in a public Facebook post. “First, I must say that I stand by all people who have experienced sexual assault or abuse. Second, I must make abundantly clear that this did not happen at all…”

Upon seeing Andrew’s post, I didn’t know what to do. Do I continue with the story? Do I not? So I waited, and read, until I stumbled upon a particular Twitter thread: it turns out, the person in question had been doing research on Andrew for a story, when she came upon an old video interview of him. At one point, the video cuts – without explicit warning – to Andrew pleasuring himself, something that caused the writer to feel personally violated.

It’s been days since that initial Twitter thread, and yet, the debate rages on. Before going any further with my initial story, I decided to bring up the situation with my editors, who stated that we needed to address it, and get a statement from Andrew. What started as a general statement turned into a larger conversation about content warnings, triggers, and how far is too far when it comes to sex advocacy.

Read our updated interview below…

So basically, the story started from this secondary person who told everyone that I had masturbated in front of them, which is not at all true. It did not happen. I have never been in the same physical proximity of this person.

I lost a considerable amount of followers from it, all because of misinformation. I still feel bad because I do believe survivors, I do believe people can be triggered by different things. I also believe that people have to take responsibility for their own triggers. If this person didn’t feel comfortable or thought there was an issue, they could have reached out and said “Hey, can we talk about this?” They didn’t do that. Instead, they told somebody who then lied and spread misinformation all over the internet.

Wow, yeah, I feel like there are so many different layers to this. So basically, for people who are unaware, this was a previously-recorded video you had done for ErikaLust?

I mean, I do understand where she is coming from. Things like “NSFW” and “Explicit” can mean so many things. They put “Explicit” on songs that have the F word in it, So, I do understand how having a more clear content warning would have been beneficial.

I can understand that, but also my challenge to that wold be, if you are researching me, I am a sex educator, and I talk about sex quite frankly.

I can appreciate that she wants a trigger warning. Going forward, in all my work — anything I do on Twitter now, anything explicit — I will be putting clear content warnings on there.

Yeah I mean, rightfully so, because the tweet, it did look like that happened. So I understand why people were like, ‘Whoa, I don’t want to touch this, I gotta go!’

It was really tough for me to see my brand crumbling in the moment, but I also understand why. This was misinformation that was painful for everybody involved. It was painful for her because people were trying to defend me and then attacking her, and then people were defending her and attacking me, until it grew into something it didn’t need to.

So, in your perspective, who is responsible? It’s obvious that this woman felt harm from this video, so who becomes responsible for that? Is it the person hosting the video? Is it you who is taking part in filming it?

It’s certainly made me consider my behavior, and reconsider how I interact. Not because I think that talking about sexuality is a bad thing, but because I want everyone to feel safe, and I want everyone involved in what I do to feel comfortable and okay. If anything, this instance brought to light how important that is for me.

I know one question that came up for me while I was researching this was, at what point does advocacy cross the line, and are there things we can do to prevent these things from happening again?

I think we have to really examine how we, especially in the disability community, talk to each other, and have these conversations. It may be that she has a different perspective than I do, like how you said “NSFW” could mean different things. Maybe her definition is different from my mine? As a community, we really have to come together and communicate about these things, because I don’t believe my wok in sexuality is wrong, and I don’t think that what I did was wrong.

I am reviewing my behavior, and seeing where I maybe made a mistake. I am taking this as a learning opportunity to ensure I do this work as conscientiously and properly as I can.

Do you think, going forward, this will affect how you do things, such as what you do and do not shoot? In other words, how will this affect your future work as an advocate?

There are still conversations going on on Twitter from people that support you, people that don’t, and unfollowed you. What would you say to your critics in this moment?

When you look at those facts, you will see it’s just a big misinformation, on all sides. I could have been clearer. I could have reached [out to the woman who saw my video] privately. I could have reacted differently too, but I was angry. I was scared of losing my brand… I am not saying this person is the villain and I am the good guy. There are things that could have done to rectify this way sooner. I think it comes down to the community coming together to have these conversations, so we make these spaces safer.