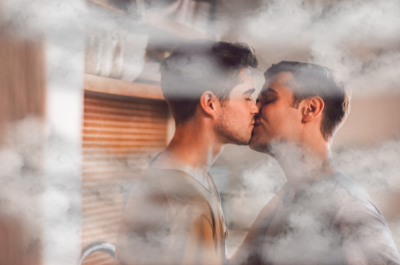 A Cincinnati man is freaking out after he made out with his best friend while they were high. Now, he’s seeking help from his local advice columnist, Michael C. Bryan, to make sense of everything.

“Thanks for taking the time to read my email man,” the letter begins. “I’ve been freaking out and I could use your advice.”

The man goes on to explain that he and his fiancé Crystal recently went to a party at their mutual friend Jeff’s house.

“Jeff is cool,” he writes. “We were in high school together … Jeff has been there with me through all the stuff and the highs of my life. We played on the football team together, we double dated in high school. He’s gonna be my best man.”

Well, shortly after arriving at the party, Crystal went off with Jeff’s girlfriend, Tori, and a few other girls, leaving the two guys by themselves.

“Jeff and I went upstairs and found this room and smoked up. We were both chillin’ and after a few hits I felt Jeff’s hand on my crotch and well–we fooled around and now I’m freaking out.”

Look–I’m not gay, okay? I’m not. I know you talk a lot about how your truly bisexual and how it freaked you out that you were gay your whole life and then admitted you’ve always been attracted to girls so you sorta came out as a gay guy whose actually truly bisexual and this sh*t has me freaked out. I kept thinking about how I’ve always sorta seen Jeff as someone I wanted to bone but I didn’t really get it until when we made out. I’m sweating writing that I always wanted to f*ck around with Jeff. I feel sick to my stomach actually.

“What does this mean?” he wonders. “That I’m gay now? Or bi? I’ve got a fiancé and she won’t get it. She’s  Catholic. Are you kidding me? I got to go to church with her family. Help.”

Luckily, Bryan is able to bring the guy back down to earth.

“Dude,” he writes in his response. “Please listen to me: give yourself a break. Seriously. Just chill.”

As it turns out, Bryan himself is a bisexual, but it took him a while to figure it out. He writes:

My therapist used to joke that I was a latent heterosexual which, let me tell you, pissed off a lot of gay guys. I was told ‘there’s no such thing as someone being truly bisexual’ and ‘you just don’t like being gay’ and in terms of the latter, they were right. I didn’t like being a gay guy, or knew how to be a gay guy and it’s because I was never totally a gay guy I was a bisexual guy who liked guys and girls. It’s crazy to think about. I get it.

Bryan goes on to say that smoking weed really helped him overcome the psychological challenges his bisexuality posed.

“I always had to smoke weed before I’d have sex with guys,” he says. “Still do a bit. I could go on and on about the thing of weed and being a guy and what happens but this is about you.”

His advice? Try not to get too hung up on labels (straight, gay, bi, whatever). Also, find some good weed.

“Good weed will strip away your boundaries and make you so chill you will allow something that’s always been there to be expressed which is why sex on weed is so fun,” he says. ” It opens up the floodgates, it lowers the resistance you carry around all day and you feel good and connect more easily to the best part of you.”

“Do like Yoda says,” he concludes, “search your feelings.”