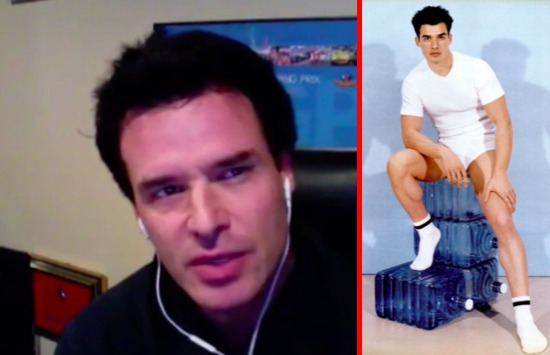 Sabàto is a former underwear model and actor turned political hopeful. He, along with several other Republicans, is currently running for U.S. Congress against incumbent Democrat Rep. Julia Brownley in California’s 26th district.

Earlier this week, Sabàto’s primary opponent, Jeffrey Burum, accused him of appearing in gay “pornography” and called on the 45-year-old to suspend his campaign immediately for spitting in the face of “family values.”

The “pornographic” films included 2003’s R-rated Testosterone, where Sabàto plays a gay Argentine who disappears under mysterious circumstances, and 2005’s made-for-TV Deadly Skies, which has a TV-14 rating for its gay sex scenes and nudity.

Some of Sabàto’s other “risqué” credits include Bad Girl Island, Balls to the Wall, and Wasabi Tuna, as well as the reality show Celebrity Wife Swap. And in 2013, he was the spokesman for AnastasiaDate, a dating site that connects North American men with women from Eastern Europe.

“That was a different time in my life, but as actors, we do roles that are pushing the envelope,” Sabàto told The Jesse Lee Peterson Show on Thursday. “You want to show off your acting ability, and you want to test your chops, and that’s what I did.”

He went on to say that every working actor has taken a few roles (or in Sabàto’s case, a few dozen roles) that they didn’t particularly love. It’s just part of the game.

“We don’t do every single movie that we’ve proud of, it’s just the way it is,” he said. “But I’m not going to see here and say, ‘I wish I did this or I did that,’ I mean that’s part of my career as an actor.”

Sabàto, a staunch Trump supporter who still insists Obama is secretly a Muslim, went on to say that his opponents are only using his film past against him because “they’re scared of me.”

“It’s just they’re trying to pull all this stuff against me because when you’re attacked as much as you can see with our president,” he said, “it means you’re doing something right.”

Watch the full interview below.