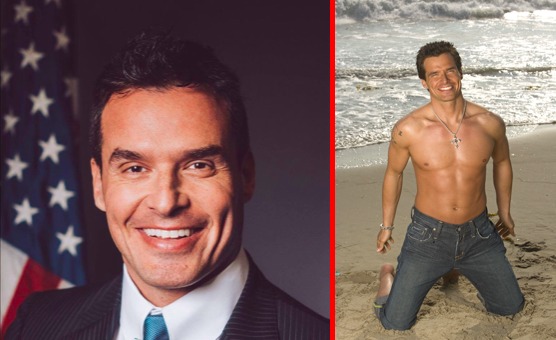 Antonio Sabàto Jr. is a former actor turned political hopeful. He, along with several other Republicans, is currently running for U.S. Congress against incumbent Democrat Rep. Julia Brownley in California’s 26th district.

45-year-old Sabàto is best known (we use that term loosely here) for being a Calvin Klein model back in the ’90s and for his bit roles on shows like Melrose Place, General Hospital, and other daytime soap operas. He’s also dabbled in reality TV. And in 2013, he was the spokesman for AnastasiaDate, an international online dating site that connects North American men with women from Eastern Europe.

All that is fine and dandy, right? Republicans have no problem nominating and voting for a “family values” candidate with reality shows like Celebrity Wife Swap on their resumes and who’ve made money off the mail-order bride industry. It’s part of what qualifies them for the job!

But it’s some of Sabàto’s other work that has folks unnerved.

In the early 2000s, he appeared in a number of gay themed films. His first was in 2003’s Testosterone where he played Pablo, a gay Argentine who disappears under mysterious circumstances. He spends half the movie in his underwear and even gets fully naked at one point:

He also appeared in 2005’s Deadly Skies, a made-for-TV piece of shit about an Air Force officer dismissed under the  the homophobic “Don’t Ask, Don’t Tell” policy. In it, Sabàto once against gets naked and has a graphic (by 2005 standards) gay sex scene with his boyfriend:

Oh, and then there was this mildly homoerotic underwear wrestling scene he appear in in 1996’s Codename: Wolverine:

But before you start salivating, you should know that Sabàto is a major Trump supporter who believes that President Obama is secretly a Muslim and that Christian prayer should be required in all public schools.

Not so hot anymore, is he?

Now, his opponents are trying to use his gay-for-pay past to ruin his chances of ever being elected.

Jeffrey Burum, who is running against Sabàto in the Republican primary, described the movies as “pornography” and said Sabàto should suspend his campaign immediately for spitting in the face of “family values.”

This prompted Sabàto to issue the following response:

I’ve done many movies. I’ve done things I’m proud of and things I’m not so proud of, that’s just the way any actor works. They don’t know what kind of congressman I’ll be, the work ethic I have.

Hang on to your hats, folks. We have a feeling this is going to get real messy real quick!