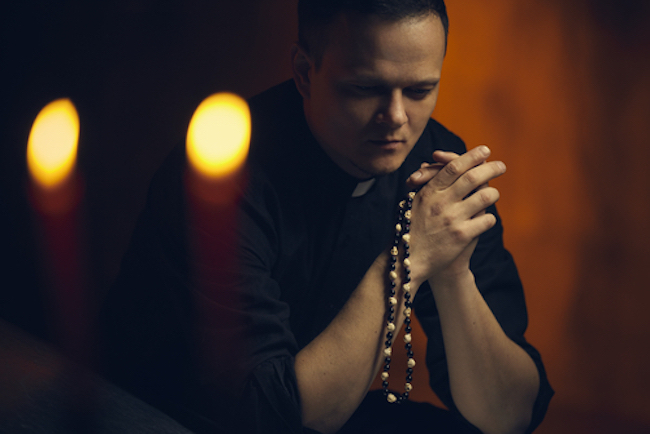 Anyone who was unfortunate enough to be raised Catholic will know of the hallucinatory awkwardness of confession: the parched, tremulous priests; those endlessly clattering rosary beads; and the ceaseless, stammering admissions of shame.

Plus, the walls of your average confessional are usually made of two-ply tissue paper, so everyone hears your shit.

Well, one hapless Redditor just shared a story that’d make a plaster statuette of the Virgin Mary break down and weep.

It stars an elderly priest obsessed with “homosexual lust” and a man who’s just trying to get his earthly sins off his chest so he doesn’t burn in hell for all eternity.

It’s a one-priest parish, rural area, everybody knows everybody.

Our newly arrived, elderly priest doesn’t hear well. I could overhear others’ confessions and moved far away… then I had to talk to drown it out.

When it was my turn, I confessed my sins of lust, but after the first few seconds, this priest interrupted with a question, asking if it was homosexual lust.

I was very surprised and truthfully said, “No, I’m a heterosexual married male and a father.

But he didn’t hear or didn’t care, and spent 15 minutes telling me all about homosexual things he has heard of.

He got agitated and very loud.

He kept repeatedly and graphically describing homosexual encounters and asking for my opinion on them.

People, including my wife and kids, could hear him all the way across the church.

I feel that everyone who listened will now incorrectly think I am a gay father and husband.

I am in shock and disbelief over the ruinous effect this will have on our family’s reputation.

What can I do? Change parishes?

The kids are right in the middle of their religious ed program, and preparing for First Communion.

Would complaining to the priest or the archbishop accomplish anything, or just create fuel for future homilies?

Will leaving the parish just add fuel to the rumors? I’m embarrassed to show my face there again.”

Needless to say, the Reddit community was more than happy to share their two cents’ worth of advise with our humble narrator.

“This is a very serious breach of the confessional seal,” says digifork.

“The priest is not supposed to announce your sins or penance to everyone within earshot, let alone accuse you of sins you didn’t commit (intentional or not).

If I were you, I would speak to another priest in your diocese for advice. He would have a better handle on what strategy for dealing with this problem would be effective for that priest and/or the bishop.”

“From what you said it seems the priest in question might actually have some sort of obsession about the subject,” says Gaivs_Marivs, “so chances are w of your parishioners, especially the male part, had the same experience.

“This sounds really inappropriate to me,” says improbablesalad, “even without the problem of being overheard!”

“I’m not sure what the right course of action is, but I know that I wouldn’t want anyone else to have a bad experience like that (like, what if it happened to a teenager? Creepy.”

“It sounds like something is off with this priest,” says supersciencegirl. “You mention hearing loss, but is dementia a possibility? Sometimes an early symptom is a loss of propriety and social norms.”

“I think you should talk to this priest and to the bishop. If this is hearing related, they need to figure out how to adjust the confession environment to allow the priest to hear parishioners while preserving privacy. If it’s something more complex, your bishop needs to know what’s going on so he can address it.

I don’t think you should worry about what fellow parishioners will think. Chances are they are having uncomfortable conversations with this priest too.”

What advice would you offer this family man? Should he stop sweating that loudmouth priest obsessed with gay sex? Or come to terms with the fact that he will be stretched across kamikaze fireballs for all eternity?

Sound off in the comments below.