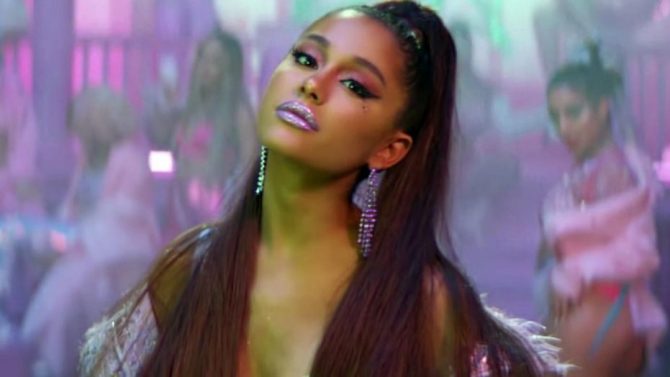 If Ariana Grande were a rap song, she probably would be MC Lyte’s 1998 banger “I Can’t Make a Mistake.”

For the past few months, the 25-year-old singer has been doing just about everything right. Her perfect period peaked in February when she released Thank U, Next, her fifth album. It deservedly earned her career-best reviews and debut-week sales, promoting her to first-string status in pop’s major leagues.

She’s been warming up since November and batting about one thousand since. First, she scored her first two number-one singles on Billboard’s Hot 100. Then, when the Grammy organizers refused to let her perform one of them on the live telecast, she boycotted the awards and won her first Grammy anyway (Best Pop Vocal Album for last year’s Sweetener).

Oh, and for her homerun showstopper, she became the first act since The Beatles to hold down the top-three spots on the Hot 100.

Can Grande do anything wrong right about now?

According to some, she just did.

Her misstep: booking the headlining spot at August’s Manchester Pride. The high-profile gig, her critics argued, should have gone to LGBTQ talent instead.

I understand where their frustration is coming from. The announcement arrived right after an Oscars ceremony in which seven straight actors were nominated for LGBTQ roles and three of them won in their categories. It became yet another example of the higher premium Hollywood places on straight performers. The power players know they can make a bundle by telling our stories and by catering to us, but most of them still don’t value us enough to use us.

Meanwhile, here in the real world, “gay” scenes are changing. As “gay-friendly” increasingly becomes the status quo, we now have to share many of our once so-called “safe spaces” with people who already have myriad meet-up-and-hook-up options. The last time I went to a gay bar — Dalton Superstore in London — I saw more straight couples making out than gay ones.

Are none of our institutions sacred anymore?

It didn’t take long after Manchester Pride chose the biggest pop diva of 2019 so far as its next headliner for one particular Grande-damning tweet to go viral: idk …. ariana headlining pride when she’s straight (as far as we’re all aware) …. and doubling the price of tickets …. kinda smells like exploitation of the lgbt community to me ….., the person wrote.

Is it fair to call the casting of Grande as the queen of Manchester Pride “exploitation of the LGBT community”? As she pointed out in her eloquent and elegant response to the tweet: over the years, pride events have been headlined by performers and artists of all sexual orientations and genders, including straight allies like cher and kylie minogue.

She began her defense by acknowledging the legitimacy of the criticism and pointing out her ties to the community. Like she said, they’re strong: She honors LGBTQ in concert by waving a rainbow flag onstage. Her brother, Frankie Grande, is a gay Broadway and social media star. And she cheekily pays homage to the power of LGBTQ lust in the video for “Break Up with Your Girlfriend, I’m Bored,” the third Thank U, Next single.

i saw many people discussing this so i wanted to chime in…. hope that’s okay ?? pic.twitter.com/7joiZwI1QS

If straight guys like Nick Jonas can pose shirtless on the cover of gay magazines for our ogling pleasure, there’s no reason why Grande, who doesn’t need to “exploit” LGBTQ audiences to boost her sales or get attention, shouldn’t get top billing on a Pride stage.

She showed her respect for the LGBTQ community by not getting defensive and not lashing out at her critics by calling them “too sensitive,” “haters,” or “trolls” (a la Kevin Hart and Ellen DeGeneres). The author of the viral post even tweeted her appreciation.

Now that everyone has had their say, I wonder how Manchester Pride’s critics would have reacted if Madonna had nabbed that top spot, or Beyoncé.

Do they have a problem with any straight singer topping the bill, or is it just Grande, who hasn’t yet graduated to the level of gay icon?

It certainly makes sense that Grande would want to support gay pride in Manchester. The city is where a terrorist bomber killed 23 of her fans and injured over 500 more after her concert there in May of 2017. She could have chosen a number of places and ways to commemorate the victims and surivivors, places and ways that probably would have earned her a bigger paycheck and less controversy, but she went with Manchester Pride because she’s always had our backs and she knows we’ve always had hers.

As for the higher ticket prices compared to previous years — £42.50, or about $56 — that’s not Grande’s call. The organizers set the cost of admission, and since we don’t know how much Grande is being paid, or if she’s being paid at all, we shouldn’t assume that the increase has anything to do with her.

Like many gay men of a certain age, I sometimes long for the days of gays-only bars, a time before bridal parties began descending on them en masse to celebrate an institution that up until a few years ago, we were excluded from. I’m glad Gay Pride isn’t limited to us, though. It’s about inclusion, not exclusion. Straight people should be allowed to celebrate us, too. Sure, Grande may attract straight fans who only care about her, but maybe they’ll learn something by accident.

Hopefully, Manchester Pride’s organizers will stack the bill with LGBTQ artists (Bananarama and Years & Years are among the other performers announced so far), and Grande won’t make her spot on the top rung all about her. She’s the pop star of the moment, so her appearances at any Gay Pride event is a win for us all and a message to straight people that they are as welcome in our lives as we would like to be in theirs.