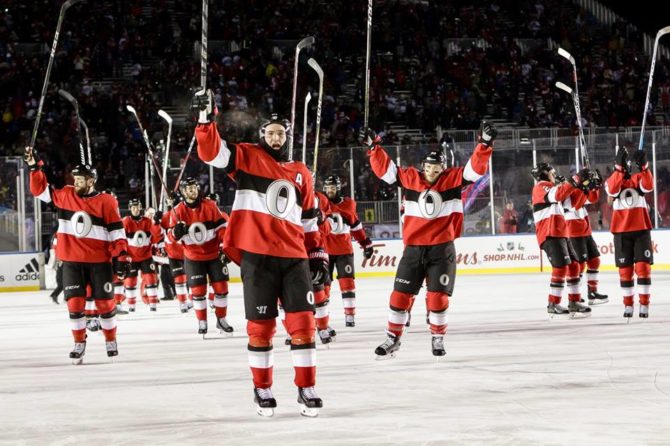 Dean Brown and Gord Wilson are the sportscasters for the Ottawa Senators professional hockey team.

While promoting their post-game radio call-in show over the weekend, they encouraged listeners to call, write, text, etc. into their show with questions and comments. And that’s when things turned unwittingly sexual.

“Gord and I … [will take] calls, questions, emails–Tinder, Twitter, Grindr–all the social media stuff. They’ll have that going on after the game tonight,” Brown said.

To which Wilson interrupted, “Grindr?!”

“Well, I don’t know what any of them do, so I just mention them all,” Brown replied.

“Is Grindr a thing?” Wilson asked.

“I guess so, I don’t know what it is though,” Brown answered.

The guys then proceeded to discuss what Grindr may (or may not) be.

Related: Hockey team tweets, then deletes this video of player showing off his stick

“I think it probably has something to do with those Mix Masters, those grinder attachments,” Brown replied. “Probably all the things you can grind with one of those machines, cheese, vegetables.”

Naturally, it has inspired quite a bit of online commentary.

“Well, looks another group of Senators are going to have to resign,” one person commented. “This is getting out of hand.”

“More of a Boy Ahoy man myself,” another person wrote.

And then there was this: “I think Dean knew what Grindr is but didn’t wanna disclose bc he’s super discreet, 7inches clean/cut, ddf and cant host.”

Related: Hockey Fan Gets Surprise Smooch From Excited Man Behind Him

To which someone else replied, “Is can’t host a sex thing or does it mean you can’t host the get together at your place?”

The audio was captured and published by Deadspin. You can listen to the full exchange HERE.