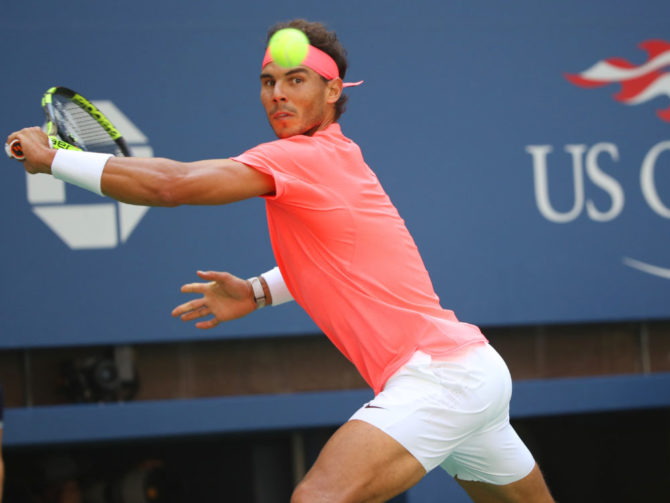 The fictional marriage happened in Peter Gil-Sheridan new Off-Off-Broadway play “The Rafa Play,” which is being produced by The Pool, a pop-up theater company.

Gil-Sheridan, who currently works as a visiting assistant professor at Indiana University, describes the play as a “self-indulgent” fantasy of “what a perfect life would look like for me.”

“When I first wrote the play I really tarted to think about why I was always lost in some sort of fantasy,” he explains. “Whether it was a fantasy about men, or a fantasy about having a really successful husband and living in a really exotic place.”

Happy to have practiced at @RafaNadalAcademy these days ??

Gil-Sheridan says all that fantasizing about things he would never have started to make him feel like a “loser” and an “utter failure.” He looked at Nadal, who seemed to have it all–money, fame, good looks, an accomplished career–and got to thinking: What would it be like to be married so a guy like that?

“The Rafa Play” centers around a gay character (loosely based on Gil-Sheridan) and his dream marriage to the 31-year-old Spanish tennis superstar. Of course, things aren’t all they’re cracked up to be, especially once the realities of Rafa’s professional demands and constant touring kick in.

Getting stronger each and every day. Check out my new @NikeCourt t-shirts. #justdoit

It’s not what would be akin to a biopic; Rafa functions as symbol in the play. I think, in that way, so many of these top tennis players function as symbol to us. Like Serena Williams: She is such a huge symbol in our culture. But who is Serena the woman versus Serena the symbol? I think it’s similar for Rafa. And for me, as a gay man, him as a masculine ideal is what I’m looking at. So it’s kind of him, and kind of not him. It’s a funny thing. He’s not being portrayed as a gay man; he’s being portrayed as a gay icon.

For the record: Nadal isn’t gay and has actually been dating his girlfriend, Xisca Perelló, since 2015. Neither he nor his team have any connection to the play and were not involved in any part of its development.

It’s time to take on the clay. Gracias @NikeCourt for helping me gear up for the clay season. #justdoit