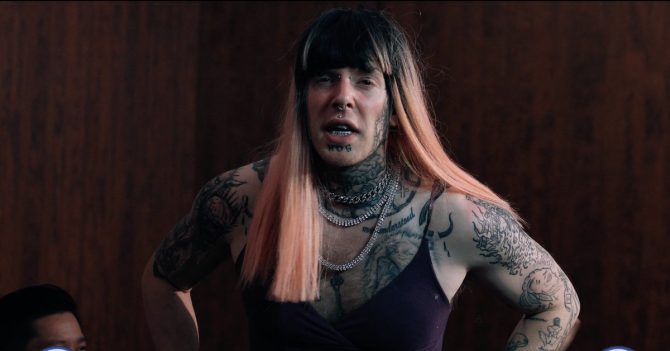 Pride season is upon us. There’s a gay man running for President of the United States. And the 50th anniversary of the Stonewall Riots is less than a month away.

So rapper Tom MacDonald thought it would a great time to release his latest single “Straight White Male,” a #NotAllMen hip hop anthem about how he’s sick of being called a racist, sexist homophobe when he swears he’s anything but.

I’m not a Nazi
I like black people, black Jesus, black Santa, black coffee
I’m not a racist
I like Hispanics and Negroes and Natives and Asians
Black Power says I’m the problem (Yeah)
Girl Power says I’m the issue (Yeah)
Gay rights think I’m tryna stop ’em (Woo)
All of y’all trippin’ I’ll get you some tissues (Ahh)

Other lyrics include lines like “Honestly I think that everyone looks alike/If they aren’t white then I’m sorry, it’s true” and “Y’all blame me for wages we’re payin’ the women/Y’all blame me for rights that gay people aren’t given.”

If you don’t think STRAIGHT WHITE MALES are demonized in 2019, you’re trippin.

The music video, which was released just five days ago, has already racked up over 1.3 million views on Youtube.

Related: Students advertise “Straight Pride” day in Indiana to “take back the rainbow”

Yesterday, MacDonald, whose other song credits include “White Boy,” “Politically Incorrect,” and “Everybody Hates Me,” issued a statement saying he meant for his new single and its accompanying video to be “satirical” and “rooted in comedy.”

OVER 1 MILLION VIEWS IN 3 DAYS. Thank you.

Rappers out here glorifying the abuse of prescription pills, gun violence, exploiting women, etc. I make a SATIRICAL SONG rooted in COMEDY about straight white males and the internet WIGS THE FUCK OUT! Hahahaha.

But most people aren’t buying the whole “Relax! It’s a joke!” excuse. Generally speaking, for something to be satirical, it has to be 1. funny,  and 2. offer some kind of meaningful insight or criticism.

Tom MacDonald is the worst rapper alive, I think we can all agree on that

Just a reminder that Tom MacDonald is still arguably the worst rapper I’ve ever heard in my life.

Tom Macdonald needs to quit making himself look oppressed in every single music video. You are well off, and privileged lmao get off Twitter weirdo

Satire is meant to “criticize people or ideas in a humorous way, especially in order to make a political point.” Tom misses the mark every time because his brand of humor is neither compelling nor encourages some kind of change. It’s internet troll behavior—he provokes people, waits for angry reactions, then calls them stupid for “not getting it” or overreacting.

For Tom to release a supposedly satirical song where he’s painting himself as the good guy of the White community, it just doesn’t sit well. Contrary to what many of his fans have said, this isn’t a productive way to use one’s straight White male privilege.

Watch the video for “Straight White Male” below. Or don’t.