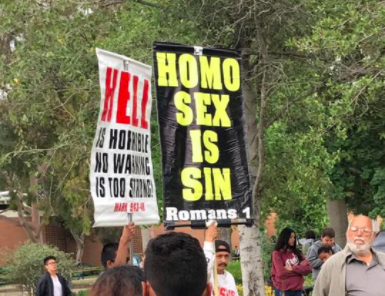 For three days this week, a gaggle of antigay Christian extremists have been tormenting students at the University of California Riverside by marching around campus with signs that say “Homo sex is sin” and “Ask me why you deserve hell” and shouting misogynistic things at female students.

Their reason for being there is unclear, but that’s really not the point here. The point is that  yesterday, things came to a head when a group of students decided they had had enough and came together to challenge the hate-mongering rabble rousers.

One of the students was a man named Deonté Lee. Rather than yelling back at the people who were yelling at him, Deonté took things up a notch… by voguing at them. The homophobes didn’t quite know what to make of the display and so they just watched, dumbfounded.

Lucky of us, fellow student Alyssa Elizabeth whipped out her phone and recorded it. In a Facebook post, she writes:

Today is the 3rd day these so called “Christians” have been on campus. They claim to be spreading the word of God, but they are only spreading hate. One of them told a girl that she will (and deserves to) be raped and that when it happens, he will fund her rapist’s defense fund. I was told that I’m immodest because I was wearing leggings, a tank top, and a jacket (which honestly didn’t hurt me at all considering I’ve been dress coded all throughout high school and am used to hearing that). These people were only preaching hatred, we were told that we are sinners for loving gay people (and then one of them continued to compare homosexuality to cocaine and alcoholism). Normally, I don’t pay attention to these people, because that’s what they want. But today was different. I stood up for what I believe in, and so did all of the other UCR students who witnessed this. Atheists, Christians, Muslims and so many other religions and cultures came together today to fight this hatred with love and a fantastic sense of humor.

(P.S. Deonté Lee you made my day with your dancing thank you so much.)