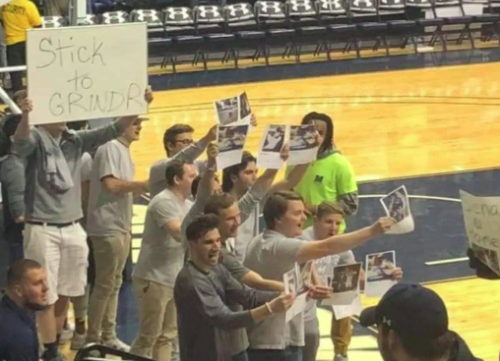 Officials from Monmouth University in New Jersey say they are investigating homophobic harassment that occurred at school basketball game over the weekend.

The disturbing incident happened at Monmouth-Siena basketball game on Saturday. During the team’s dramatic 86-72 loss in its final home game of the season, a group of Monmouth students unveiled a sign directed at one of the Siena players that read “Stick to GRINDR” along with photos taken from the young man’s dating profile.

The stunt was met with swift backlash on social media.

“As someone that played football at Monmouth and takes pride in being a Hawk this is unnecessary and disgusting behavior,” one person tweeted. “So disappointing that some students have to be idiots and represent the University in such a negative light. They should be banned from future sports events.”

“Those who wonder why it’s important to celebrate Pride nights in sports, here is a prime example.” another said. “Why can’t we just let athletes play?

Patrick Leahy, the president of New Jersey’s Monmouth University, issued a statement saying the school would investigate the matter, calling it “highly offensive” and affirming that “discrimination of any kind will not be tolerated on this campus.”

A message to the Monmouth University community yesterday. pic.twitter.com/gqntsrffUl