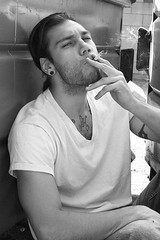 A new study out of the University of Colorado Cancer Center indicates gays and lesbians are about twice as likely as heteros to smoke cigarettes.

According to the study, which surveyed 1,633 smokers at some 120 gay bars and clubs, more than 80% of respondents smoked daily and nearly a third lit up at least 20 times a day. Most disturbingly, less than 30% said they were planning on quitting.

Fewer than half (47.2%) had attempted quitting in the previous year, and only 8.5% were preparing to quit in the next month.

More than one-fourth (28.2%) of quit attempters had used nicotine replacement therapy (NRT), and a similar proportion said they intended to use NRT in their next quit attempt.

Lesbians were significantly less likely than gay men to have used or intend to use NRT.

One-fourth of respondents said they were uncomfortable talking to their doctor about quitting smoking.

The report, just published in Nicotine & Tobacco Research, indicated four factors were involved in the likelihood that a smoker was going to quit: daily smoking, ever having used NRT, a smoke-free home rule, “and comfort asking one’s doctor for cessation advice.” Said co-author Arnold Levinson, “we need public health campaigns to get the GLBT smoker population thinking about quitting.”