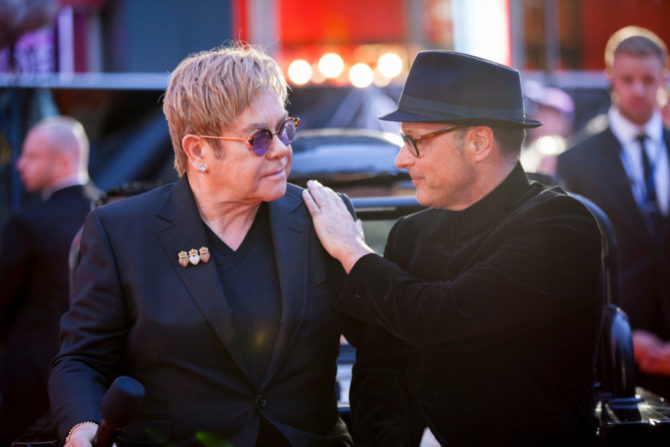 Beloved entertainer, music legend, queer pioneer and real Rocket Man (take that, Kim Jong-un!), Sir Elton John is enjoying a, well, revival of sorts, not that the accomplished showman really needs one. But at 70, the Oscar, Grammy and Tony winning composer has just added action star and runway style maven to his resume.

It started with the release of Kingsman: The Golden Circle two weeks ago. The action comedy—a spoof of secret agent movies—features Sir Elton in a key role as, of course, himself. In the story, super villain Poppy (played by a hilarious Julianne Moore) has kidnapped Sir Elton, and forced him to perform as a permanent resident of her Americana theme park hideout, reminding us that he long ago did make the mistake of performing for Putin and Rush Limbaugh. Seriously.

Sir Elton, however, resists his captors and even gets in on the action. Dressed in a rainbow-colored suit of ostrich feathers, he does some wild Kung Fu moves to help save the day. He even gets flirtatious with Harry Hart, a secret agent played by Colin Firth. Here’s hoping Elton comes back in the sequel as Harry’s love interest, or, at the very least, Sir Elton turns up in the next Expendables movie. Hell, he is the right age. (Oddly, the Kingsman publicity team refused our request to send us screen shots of his appearance.) 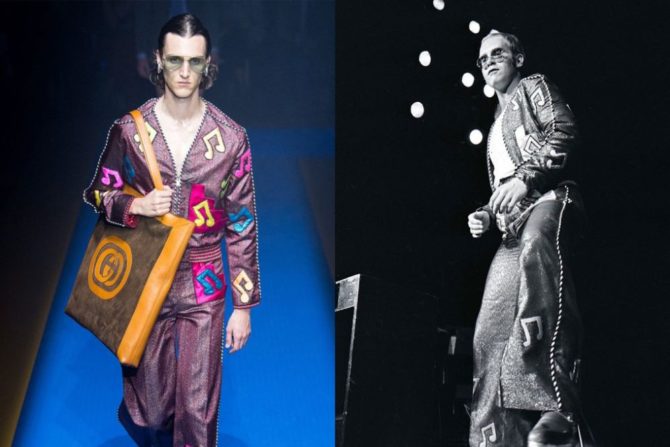 If Sir Elton helped save the world and looked very fabulous while doing it, apparently the folks over at Gucci noticed. Designer Alessandro Michele unveiled his new collection at Milan’s Fashion Week: a line of clothes based on the groundbreaking, glam style of Sir Elton, which was once derided as kitsch but is now recognized for what it is: fabulously flamboyant spender, a look most of us can only hope to obtain. Some of the clothes included sequin jumpsuits, a musical note leisure suit, and another suit made of purple snake leather. Here’s hoping designer Bob Mackie, who designed most of Elton’s original clothes (as well as some of Cher’s most iconic looks), gets a check in the mail.

So, in all, Sir Elton is having one hell of a year, reaffirming himself as a cultural—and queer—icon. And the best is yet to come: He’s at work on the forthcoming musical adaptation of The Devil Wears Prada. No doubt Hollywood and the fashion world will pay attention to that.