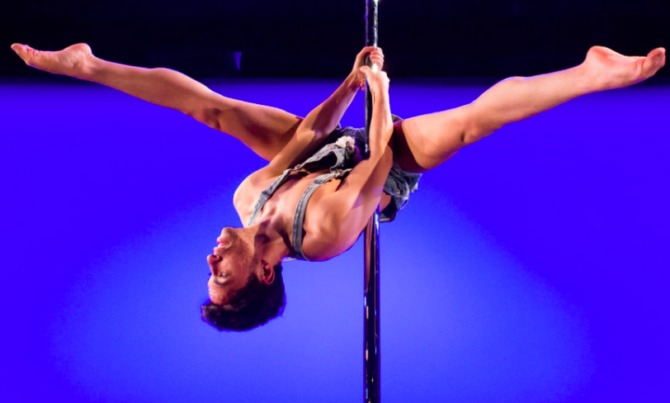 Darling, whose real name is Daniel Rivera, recently competed at the Pole Sport Organization Triangle regional competition, a qualifying event for the group’s national pole-dancing championship, where he was the sole male competitor.

He’s one of a small but growing number of men making names for themselves in the female-dominated sport of pole dancing–a field that blends gymnastics, modern dance, ballet, international movement traditions, and circus arts–and its stigmatized distant cousin, stripping. Darling is also among the pole performers trying to disrupt norms, particularly the gender binaries that divide movement, makeup, emotion, and even high heels into “male” or “female.”

Before getting into pole-dancing, Darling, who identifies as gay, did ballet and ballroom dancing.

“I loved [ballet] because it had a softer side,” he says. “I love the strong, delicate quality of the movement. But I realized, as a guy, I can’t really be the delicate one, I have to be the strong one–because with ballet, you have to be a guy and a girl.”

Pole-dancing, he says, is pretty much the same thing.

“This need to be a little more feminine started a long time ago,” he says. “Now I’m pushing my art form more, I’m pushing the feminine a bit more.”

“I have spent my entire f*cking life with people telling me my body is wrong,” he says. “Who cares what the genitals are on the pole?”

Watch Darling in action below.

Related: This insane pole-dancing routine will have you begging for more… culture.