Few directors have the casual modesty of Harry McQueen.

The genteel, charming director first emerged on the world stage as an actor. After studying at the prestigious Royal Central School of Drama and Speech in the UK, he made his debut in Richard Linklater’s drama Me and Orson Welles. He followed up by landing a role on the popular UK soap opera EastEnders and in the indie films Provenance and Hinterland. The latter also marked his debut as a writer/director.

Supernova marks McQueen’s second feature as writer/director. The film follows an aging gay couple: Tusker (Stanley Tucci), a writer, and concert pianist Sam (Colin Firth). The two plan a road trip across the UK so Tusker might find time to work on his final novel–he suffers from early-onset dementia, and his mental faculties are in rapid decline. With disability and death looming, Tusker & Sam must confront the realities of aging, and the loss of a lifelong love affair.

We snagged time to chat with McQueen about his inspiration for the film, his reasons for casting two straight actors as gay men, and how empathy leads to art. Supernova lands on VOD February 16.

So what made you want to write a film about two gay men facing old age and death together?

Well, it doesn’t start necessarily with all those things in place. It started for me when I spent a lot of time with people living with young-onset dementia. I was very inspired by that, enough to write a story about it. So naturally, if you’re talking about people with young-onset dementia, you’re talking about people in their 50s and 60s. So that explains that part of it.

Then, hopefully, the film is a universal story. It is specific, of course, but it’s about universal themes: love and death. Terminal illness. Passionate romance. Trust. All of those things are the most important part of it. So it seemed for me, as someone who wanted to make it original, progressive and interesting, to make it a same-sex couple. It seemed like a natural thing to do and an important thing to do. I hadn’t really ever seen in a film or heard many stories told about middle-aged love between two men. So it felt like the right thing to do and it became integral from then on. 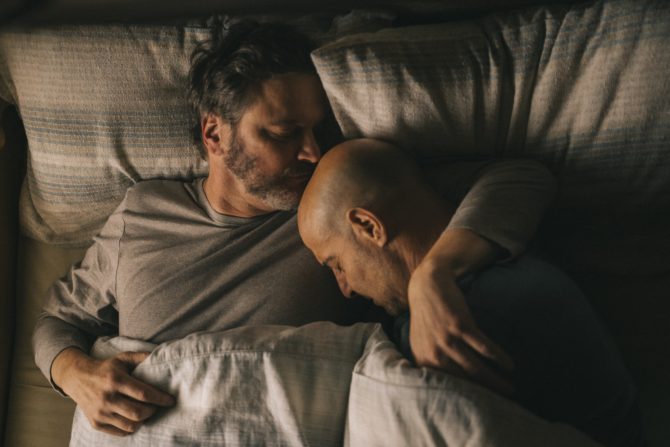 That’s terrific. The film really captures the frustration when it comes to health, the feeling of powerlessness. That’s one of the universal themes you mention there—we’re all powerless in the face of death.

That anxiety though is something you have to intimate. You can’t have your characters just exposit “Hey, isn’t death awful.” As a writer, how do you go about projecting something so intangible like that to an audience? How do you make clear the subtext?

Well, I’m not sure I have an exact answer for that. I wish I did—my career from now on would be much easier. I think it’s tricky. It’s always hard to make a story feel told effortlessly to an audience. I’m not saying we did that here, but that’s what we strove to do. I think it starts for me with knowing the characters. I’m an actor myself, and so that’s where it starts for me, really. I need to know who these people are and to have those characters surprise you. Film also lends itself well to portraying the unsaid, the world of subtext. Subtext is obviously the key word here. If you’re trying to be eloquent without being too didactic, it’s all about subtext—playing it and writing it.

Great answer. The issue of control is a major theme here, obviously. That manifests largely as Tusker’s need for control over his health. The control also spills over on to Sam, Colin’s character. You end the film on a very ambiguous note when it comes to his character. I don’t want you to give anything away here, but in your mind, does Sam’s character have a definitive end? Do you discuss that with Colin?

The honest answer is no, I didn’t and I don’t. The story ends there for me, as it does for the audience. You’re right, it was certainly the intention to make the end be ambiguous. When I’m watching films or reading stories, [an ambiguous ending] is like a gift the author or the filmmaker is giving you. It’s like I’m not going to wrap this up for you. I’m going to give you some information. Make of it what you want. To have a story exist independently for everyone is a beautiful exercise. It’s certainly what I wanted to do here. When you’re dealing with sensitive subjects that affect a lot of people, sometimes there is no answer. I think that’s an important thing to acknowledge. I also think, if I may say so…

Cinematically, I think it’s quite brave to do so. That can be alienating for some people, but I think it all comes down to wanting to do right by the material. It seemed, for me, that was the right thing to do. 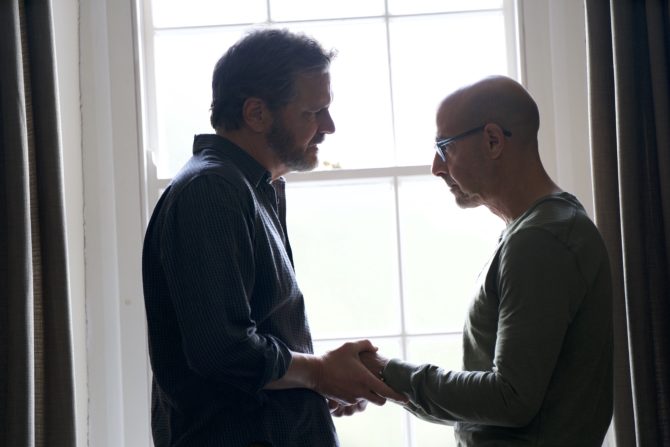 Wonderful. We have to talk a bit too—you cast two heterosexual actors as gay men. They’re both wonderful and respectful in their performances. You’re straight too, as I understand it. Obviously, there’s a cultural conversation going on right now about casting. What assurances would you give to a queer audience that might be nervous or skeptical that, because the movie stars to straight men and has a straight director, it may not accurately capture gay life, or may be appropriating it?

Well, I think, really, ultimately, it comes down to the intention of the project. The intention of this project is to be respectful and compassionate of everyone, certainly of people dealing with this kind of situation. If it’s done with integrity—and that’s a word that gets thrown around a lot—but that really is the important part of it. Obviously, you have to watch the film to know that.

As a filmmaker, you have a responsibility to have an open-door policy for whomever you work with. That should be what you want to do anyway as a humanist. We certainly did do that. I would say too that these things need to be taken project by project. To make this project happen, to portray these characters, we couldn’t have got two other actors on the planet. I’m positive of that. No one could have done it as well as Colin and Stanley have done it. That’s partially because they’re amazing, compassionate actors and people. But also, they’ve known each other 20 years. They love each other. That’s not fake. That’s all authentic.

It’s funny, I’ve been having this conversation with myself and with everyone else from the moment I made the characters a same-sex relationship. You can’t ignore as a filmmaker how amazing the possibility is to get these two actors for these two roles. There are a lot of other ways the film is very forward-thinking, so I think that counts too. 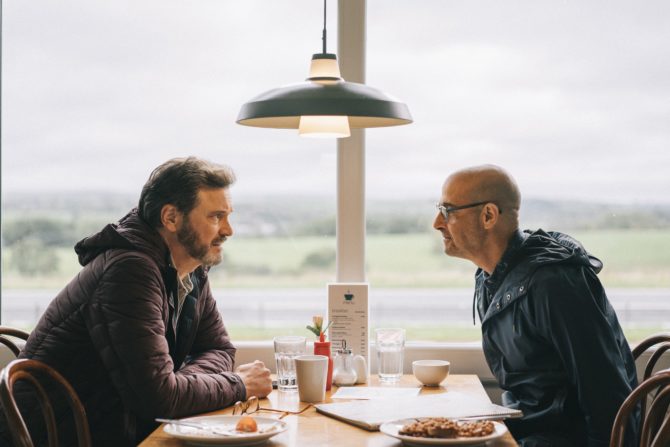 I would say so. I need to ask too, is our approach in casting a film too literal at times? Your background is in theatre, where issues like race, sexuality, and gender can go ignored and an audience will accept it. Should we be attempting to do the same in film?

I guess you’re right. Suspension of disbelief is a lot easier and a lot broader in theatre for loads of reasons, some very obvious. I think casting sometimes can be very lazy. As an actor myself, you don’t want to just keep playing the same part over and over again. Sometimes you don’t get the most authentic results, even from someone who has literally lived the experience. There are lots of factors that must be at play when you’re casting someone in anything. So I think that’s probably true.

On the whole, in basic terms, you can get away with less in film. I think that is probably partially why people in the casting process tend to be a bit more conservative than they might normally be. It’s certainly possible.

There are also an increasing number of directors—Josie Rourke comes to mind—who refuse to be so literal with their casting. And I think it makes movies far more interesting.

It can work both ways, obviously. If you look at a lot of Andrea Arnold’s (director of Fish Tank and American Honey) work, she goes to great lengths to find people that are very much the character, and that has great results too. 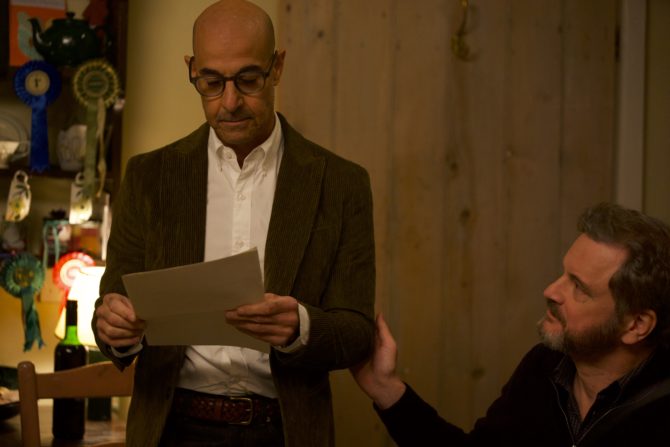 Absolutely. To address the theme of death in the film again—for you as an artist, what truth do you realize when you have to explore death so deeply in a film like this?

Many. Probably a lot I haven’t even realized yet, to be honest. When you’re dealing with a story that involves someone looking toward the end of his life, and that end is coming soon, I think a lot about what we take for granted. I thought about that a lot when I was trying to get into Tusker’s head. It’s interesting to talk about this now in the context of the pandemic. One thing it’s teaching us is that we do take a lot for granted, and we do take people and relationships and love and all of that for granted sometimes as well. That’s something that the film—as much as it’s about death, it’s also about love and how we spend time with the people that mean the most to us. That’s really a live conversation at the moment.

So, ok, last question. This is your second film as director. What satisfaction do you get from directing that you don’t get from acting?

There’s a lot that satisfies me about directing, and there’s a lot that acting satisfies in me that directing doesn’t. Any actor will tell you that it’s an incredibly disempowering job a lot of the time. When you’re not working, you don’t have much power over getting work again. Someone else has to make the decision for you.

When you’re writing your own stuff or your own films, you have a degree of control over your creative output, which I think is really rewarding. I think one really shows you a lot about the other. Directing isn’t easier than acting, but it does bring up a lot of what you don’t see as an actor. There’s so much riding on you when you’re directing. It’s a very different kind of pressure than what you’re under when you’re acting. It’s useful to know both.