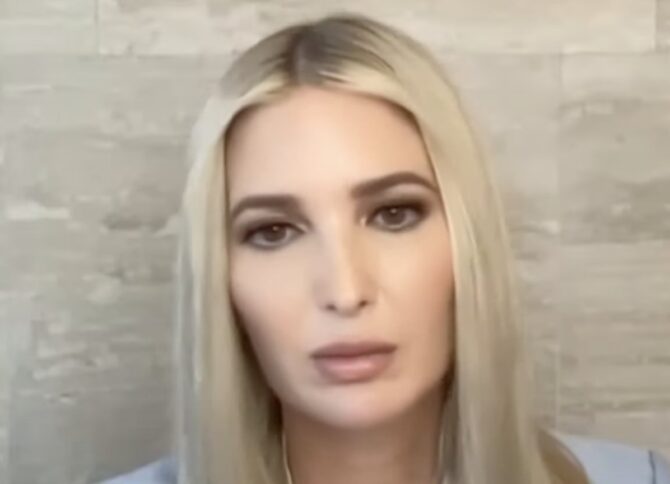 Uh oh! Ivanka Trump has some explaining to do.

Among the footage broadcast was testimony from the former first daughter in which she said she “accepted” then-Attorney General Bill Barr’s statement on December 1, 2020 that the DOJ didn’t find any evidence of fraud in the 2020 election, despite her father’s repeated claims to the contrary.

“I respect Attorney General Barr so I accepted what he was saying,” Ivanka said when she spoke virtually with the committee for nearly eight hours back in April of this year.

Well, turns out, that might’ve been a lie. Or maybe Ivanka just remembered wrong? Who knows? But according to The New York Times, she told documentary filmmaker Alex Holder a completely different thing on December 10, 2020, nine days after Barr made the assessment that supposedly led her to “accept” the election results.

“I think that, as the president has said, every single vote needs to be counted and needs to be heard, and he campaigned for the voiceless,” she told Holder, according to The Times.

“And I think a lot of Americans feel very, very disenfranchised right now, and really, question the sanctity of our elections, and that’s not right, it’s not acceptable.”

Oh, but she didn’t stop there.

Ivanka went on to say that her dad would “continue to fight until every legal remedy is exhausted and that’s what he should do.”

Holder interviewed several people in Trump’s orbit in the weeks following the election, including Ivanka, Jared, Don Jr., Eric Trump, and Mike Pence. His documentary was intended to be a “legacy project” for Trump. Instead, it has turned out to be invaluable evidence for the House committee.

Related: Ivanka and Jared blasted as “despicable” by partner of fallen Capitol officer

The committee subpoenaed Holder last week and he confirmed yesterday that he’s handed over all the footage requested. He is scheduled to testify under oath before the panel tomorrow.

Since being caught talking out of both sides of her mouth, and possibly committing perjury in the process, neither Ivanka nor her attorney have responded to requests for comment.

Seems clear that Ivanka was less than honest with the January 6 Committee https://t.co/uVuX7fXjCk

Let’s talk about Ivanka. In her sad voice she told J6C that she respected Barr and what he said about no fraud. BUT in the doc given to the J6C this week she’s sitting right beside her gross Dad telling a room full of people that Daddy should definitely keep fighting

She’s her father’s daughter. Honesty is not a strong trait in that family.

Ivanka was all in on Daddy’s coup until it failed.

Interesting how she’d say one thing in a “documentary”, another thing under oath.

She is an empty vessel. She will say or do whatever depending on who she is manipulating. Apple didn’t fall very far from the tree.

Ivanka has spent a lifetime angling to be her dad’s favorite child and it has worked. What she said to the documentary crew fits with that strategy.

OMG – people wake up.
SHE is the most conniving of them all.
She and Slenderman played everyone…. and still are.

Of course she was going to commit perjury.

Earlier this month, Mary Trump went on MSNBC to discuss Ivanka’s testimony to the January 6 committee, as well as Donald Trump’s response to it, when he accused her of being “checked out” after the election.

“I think Ivanka walked a very fine line,” Mary said. “She did not say anything necessarily incendiary but, as we thought would happen, she decided she needed to come down on the side of what the facts support.”

“Donald didn’t entirely throw her under the bus,” she added, “but I just think it’s really important to point out that the fact that he said she ‘checked out’, although that’s kind of rude, isn’t really the issue. He’s accusing her of perjury.”

Mary went on to predict that the future of their relationship will depend on how much they can benefit from one another, saying everything between them “is entirely transactional.”

“Once one or both of them come to the conclusion that there’s nothing in it for them, then they will move on,” she predicted.