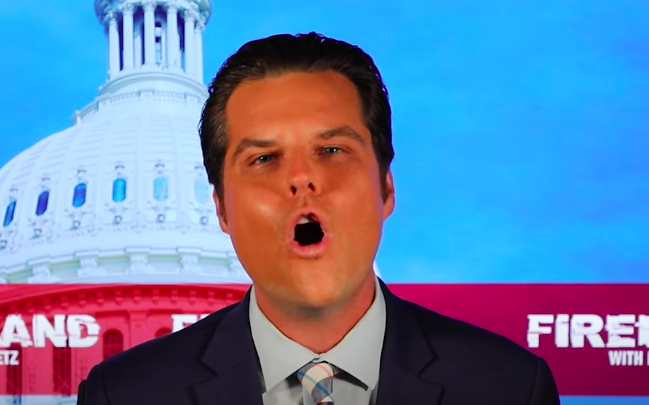 Last week, the antigay congressman’s ex-girlfriend testified before a federal grand jury investigating him for sex crimes. Now, CBS News reports that she’s officially been granted immunity and is being treated as a potential key witness in the case against him:

The woman, who CBS News is not naming to protect her privacy, testified in front of a federal grand jury in Orlando last Wednesday. She is viewed as a potential key witness, according to two sources familiar with the investigation. One of the sources said she has information related to the investigation of both the sex trafficking and obstruction allegations.

In response to this bombshell news, Gaetz’s attorneys issued a statement saying they’ve seen “no credible basis” for a prosecution of their client.

But CBS News legal analyst Rikki Kleiman points out, “The government does not give immunity blindly. They know what they’re getting in exchange.” Which suggests that there must be at least some credible basis, or the feds wouldn’t have granted the ex protection.

News of the investigation into Gaetz first broke last March. According to The New York Times, it was opened in the final months of Trump’s failed one term presidency under the direction of then-Attorney General Bill Barr.

Matt Gaetz's life and career are over, whether he knows it yet or not. https://t.co/imYZKLajRx

I hope this means Matt Gaetz will be granted an indictment.

The walls are closing in on Matt Gaetz thanks to his ex-girlfriend who I personally think is lovely.

BREAKING – Matt Gaetz’s ex-girlfriend not only testified before grand jury — she was granted full immunity.

She had receipts. You don’t get full immunity without receipts.

Holy shit Matt Gaetz was just put on the burner.

Raise your hand if today is a GREAT day to arrest Matt Gaetz! ?

Matt Gaetz is about to pay for what he did… but not on Venmo.

There’s only one reason why Matt Gaetz’s ex-girlfriend would be granted immunity to testify.

Rapey McFivehead, you in danger girl.

Gaetz has repeatedly denied any wrongdoing in the ongoing case against him.