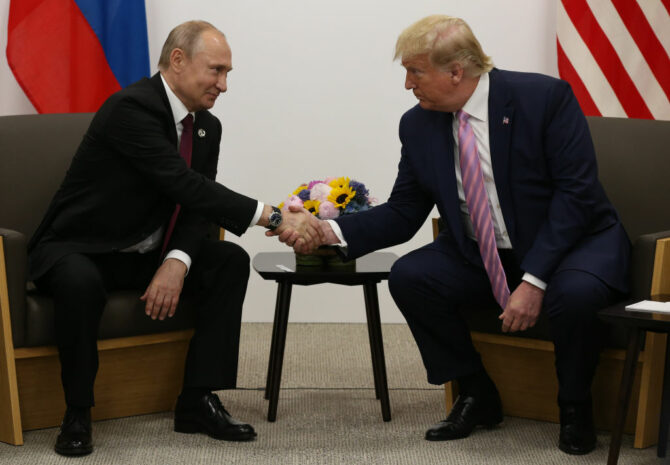 Despite Russia’s deadly unprovoked attacks on Ukraine, the bromance between ex-president Donald Trump and murderous dictator Vladimir Putin appears to be firmly intact.

During a 30-minute interview with Sean Hannity yesterday, Trump was given multiple opportunities to walk back all the praise he’s showered Putin with over the years, but he chose not to.

“I think you also recognize he’s evil, do you not?” Hannity asked after bringing up how Trump called Putin “smart” for invading Ukraine.

“Well, I was referring to the fact that he said this is an independent nation, talking about Ukraine, and I said that this was before there was any attack,” the ex-president replied.

Trump says he only called Putin smart before he invaded, says Putin has changed but he wouldn’t have changed if he was still President, and takes credit for Russian tanks being destroyed pic.twitter.com/QTi1kRGq5T

Later, Hannity asked, “When you got criticized for saying that Vladimir Putin is smart, we’ve had many conversations, and you’ve often quoted to me Sun Tzu, ‘The Art of War’. Keep your friends close and your enemies closer. Is that how you viewed Vladimir? Did you view Vladimir Putin and people like President Xi and Kim Jong Un and the Iranian mullahs as enemies that you needed to keep close?”

Related: Another nail was just driven into the coffin of Donald Trump’s failing hotel business

This is getting weird. Hannity is coaching Trump throughout this interview and trying really hard to get Trump to say Putin is an enemy and evil pic.twitter.com/XHTzvS2emX

When Hannity brought it up a third time, Trump suggested that, had he been reelected in 2020, the current humanitarian crisis in Ukraine never would’ve happened in the first place.

“Putin is for Russia, and you see what happened,” he said. “And that is all because they didn’t respect our leader. Look, there was nobody, and Putin will tell you this. If he was telling the truth, and I am sure he has told it to all of his inner sanctum, nobody was tougher on Russia than me.”

The only logical conclusion we can draw from all of this is that the “pee tape” Putin allegedly has of Trump must exist somewhere because it makes zero sense why he keeps kissing the Russian president’s ass every chance he gets.

Who else thinks Trump AND Putin are evil? ?

#GoodMorning to everyone who remembers that Donald Trump was Putin's puppet.

Sean Hannity asked Trump to call Vladimir Putin an “enemy” — but Trump couldn’t do it. Even after Putin bombed multiple children’s hospitals. However, Trump did manage to call OUR press the “enemy of the people.” True scum! How did 75 million people vote for this treasonous man?

Extraordinary to think we went from Reagan talking about ‘the evil empire’ to Trump as Putin’s head of PR.

Trump has made it abundantly clear where he stands

I’ll never get over Trump’s interview with Bill O’ Reilly, when, told that Putin is a killer, Trump responded:

We thought that Putin and Trump formed an Axis of Evil when in fact it was an Axis of Utter Incompetence (and also delusion and evil).

Sean Hannity: “You understood that they (Putin) were capable of evil things”

Putin really must have some kind of dirt of Trump.