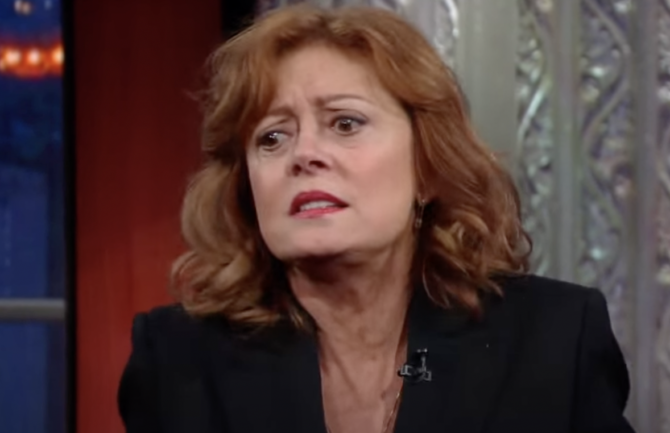 Bernie bro Susan Sarandon is trending on Twitter (again) after the Supreme Court ruled to overturn Roe v. Wade, upending nearly 50 years of precedent which allowed abortion until about 24 weeks of pregnancy.

Sarandon has become something of a liberal lightning rod ever since she famously said in 2016 that she wasn’t sure she could ever bring herself to vote for Hillary Clinton and suggested she would cast her ballot for Donald Trump instead.

Well, things certainly exploded. Unfortunately, not in the way Sarandon, who is worth an estimated $60 million, said they would. The revolution didn’t come and instead we got not one, not two, but three right-wing Supreme Court Justices with extremely conservative leanings who just blew up the right to a safe abortion in the United States.

The Court’s decision to overturn Roe in favor of Mississippi in Dobbs v. Jackson Women’s Health is expected to result in abortion being outlawed in half the states. Of course, this isn’t really Sarandon’s fault, but a lot of people are mad at her anyway.

I hope Bernie and his Bros and Susan Sarandon are enjoying the Supreme Court rulings today. But at least we didn't get the email lady to appoint 3 justices.

Wakes up. Sees Susan Sarandon trending. Prepares for that kind of shit day.

I can't help but wonder if Susan Sarandon is proud of herself.

Dear Susan Sarandon,
I'm an archeologist and my team and I have spent countless hours digging down to the center of the earth searching for who the fuck even asked you.

Thinking about how in 2016 Chris Hayes sat on tv giggling with Michael Moore, Bernie Sanders and Susan Sarandon while spewing anti-Hillary rhetoric

I hope Susan Sarandon is enjoying the revolution. ?

Although not everyone has jumped on the “Blame Susan!” bandwagon…

I don't blame Susan Sarandon for Trump winning and picking 3 SCOTUS seats. I just think Susan Sarandon represents rich white women who won't be affected by the loss of abortion rights or gay rights or trans rights while they preach to us about what we did wrong.

It’s days like this when I really wish Susan Sarandon had appointed some better justices to the Supreme Court.

Future historians will use Twitter keyword search data for “Susan Sarandon” to document the extent of the mental illness problem that plagued Democratic politics in this era.

If Susan Sarandon is powerful enough to take down a Presidential campaign, I hope she goes after the filibuster next! ?

Who is to blame for the sinking of the Titanic? Captain Smith or Susan Sarandon. pic.twitter.com/EUBQtRrdnm

Looks like 6 years of screaming at Susan Sarandon and voters was really helpful. We should definitely keep doing that.

So, how’s Sarandon responding to all this?

So far, she’s been radio silence on social media. Aside from a retweet the other day, her most recent original tweet is from June 19 and features a video taken from her vacation in San Juan.

Subscribe to Queerty for a daily dose of #life #donaldtrump #roev.wade stories and more