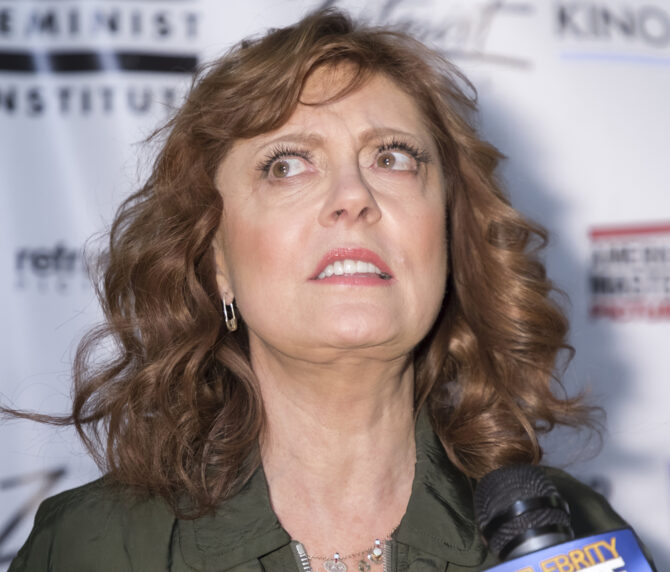 Longtime LGBTQ ally Susan Sarandon has been having a tough couple of days on Twitter.

To understand the situation, we need to travel back in time to the year 2016 when Sarandon, while campaigning for Bernie Sanders, went on MSNBC to say she wasn’t sure if she could ever bring herself to vote for Hillary Clinton then suggested she might cast her ballot for Donald Trump instead.

Well, things certainly exploded. Unfortunately, not in the way Sarandon, who is worth an estimated $60 million, suggested they might. The revolution didn’t come. Instead, the United States ended up with the most hateful, most divisive, most antigay, anti-immigrant, anti-Muslim, anti-just-about-everything administration in modern history.

The country also ended up with not one, not two, but three right-wing Supreme Court Justices with extremely conservative leanings who are now poised to be the deciding votes in whether to overturn Roe v Wade. While the court’s final ruling isn’t expected until June, the general consensus after the oral arguments this week is that the constitutional right to an abortion will be stripped away by next summer.

Now, many on Twitter are turning their ire toward Sarandon, saying she used her platform as a celebrity to poison people’s minds in 2016 and help pave the way for Donald Trump’s presidency…

Are we doing “fuck you Susan Sarandon?”

Why didn’t y’all tell me?

Remember when I made this? pic.twitter.com/G4C1DMptkM

and is this “susan sarandon” in the room with us now?

I woke up to see Susan Sarandon trending. Did she finally apologize for repeatedly saying Hillary Clinton was far more dangerous than Trump, now that women are losing their reproductive rights?

Keep thinking this fucking crackling wheeze when I exhale is gone for good, and then the shit comes back. I will never forgive Susan Sarandon for this shit.

Imagine being so propagandized by a political party that you blame the country’s problems on Susan Sarandon instead of your worthless fucking party that controls the entire government right now.

The biggest lumps of turd on here are white, male blue checks who have unhinged hissy fits about Susan Sarandon every time abortion is on the table bc they believe in their heart of hearts that they’re feminists while giving 0 fucks about policies that actually uplift all women.

The people blaming Susan Sarandon for Trump's win in 2016, need to have their brains examined. 1st of all that's mathematically impossible. 2nd of all She's just one woman. If she had that much power, Bernie would have won.

All I’m saying is if you can’t win an election without Susan Sarandon then you better start listening to Susan Sarandon. pic.twitter.com/9dS10gjGSh

Susan Sarandon would have won.

Ffs! Everyday day I wake up to the same argument. Will Susan Sarandon just give us universal health care already?!

A still from the documentary "The Witches of Eastwick," which follows Susan Sarandon's mastery of dark magic. In this scene she casts a spell on the Dems, which renders them powerless, transforms Hillary into a bad candidate & makes herself controller of the universe. pic.twitter.com/kV6Hr95Hvt

In 2020, Sarandon teamed up with Pete Buttigieg and the band Tenacious D, plus several other celebrities, to record a socially distanced get out the vote video for Democrats set to “Time Warp” from The Rocky Horror Picture Show.