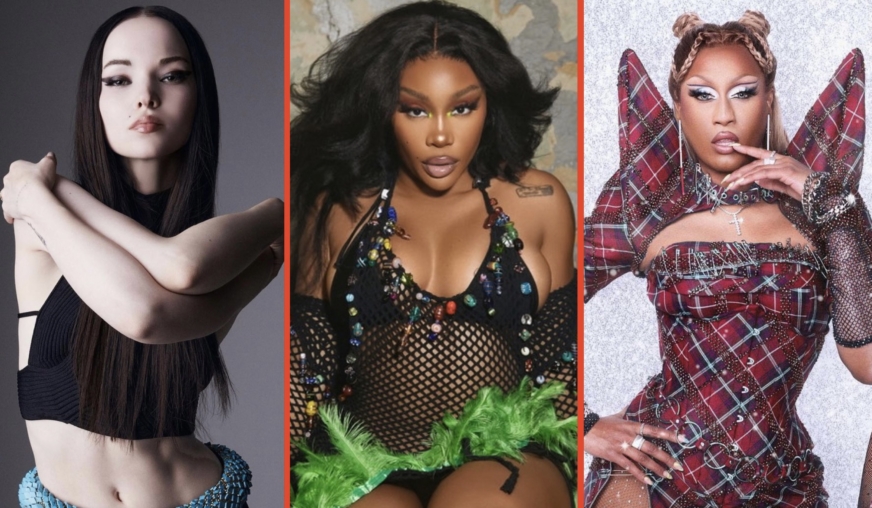 Honestly, this week was a series of serves. Markiplier served his cheeks for charity, Congresswoman Vicky Hartzler served up some hilarious homophobic theatrics, and the Trump Organization got served a lovely guilty verdict for tax fraud.

And you know the girls of the music world served hardest of all. In addition to the following packed list, Caroline Polachek, Paramore, and an Ethel Cain/Florence duet had the gays clamoring for more.

From an unexpected pairin’ to a holiday harem, here’s your weekly bop roundup!

“Ghost in the Machine” by SZA feat. Phoebe Bridgers

S.O.S., the highly anticipated sophomore project from SZA (who hinted at her sapphic inclinations earlier this year, don’t come for us) has finally dropped, and it was worth the wait. While tracks like “Nobody Gets Me”, “Blind”, and “Conceited” are getting their shine, our eyes went straight to the duet that had SZA fans everywhere saying “you aight, white girl!” SZA has had singer-songwriter inclinations in her work since her outset on tracks like “Supermodel” and “20 Something”, so the collab shouldn’t have been a total shock, but it’s definitely a welcome surprise.

I haven’t written the phrase “maximize their joint slay” in weeks, and I’m glad I saved it for something that warranted it. Between Lemon’s “Come Through” verse, Shea’s “Your Name”/”Let Go” double feature, and Alaska’s whole discography, Priyanka gathered some of the most certified hitmakers to graduate from RuPaul’s Drag Race on one bell jingling track. The original “Sleigh My Name” video was another great entry into the Taste Test Cinematic Universe, but I fear Pri has outdone herself with the remix.

Dove Cameron’s “Boyfriend” bad girl turn has been so exciting to watch, and “Girl Like Me” just keeps the midnight ride vibes rolling. The second that black hair dye hit her scalp around this time last year, the bops started percolatin’. Many pop girls have to spend years pumping out hits and acting wild to buck the Disney alumni image, but it feels like Dove’s just kind of moved on naturally. She told Billboard earlier this year that she “never felt like a ‘Disney Girl’,” and her current catalogue is sounding like that’s not a bad thing.

“Look At You” by Rebecca Black

If you still have any image of Rebecca Black in your mind as “The Friday Girl™”: Hello. Welcome to 2022. It’s almost over, but you can still catch up. She’s been putting out excellent genre-true pop like “NGL”, “Anyway”, and “Read My Mind” feat. Slayyyter for years now, and between “Look At You” and previous single “Crumbs”, this new era is shaping up to be the best yet. The levels she shows off in this half-ballad, half-bop are excellent, and that emotional turn at 2:30? Chef’s kiss.

“This Year” by Emily King

Emily King has this magical talent to make music sound like all the levity in the world. It could be her vocal quality, it could be her arrangements, or it could just be her spirit making its way on the track. Whatever the method, this ultra-bouncy piece of self worth reclamation R&B brings it. Her ability to be optimistic while avoiding saccharinity can make a listener of even the most irony-pilled queer person.

Join us back here next week for another bop after bop!