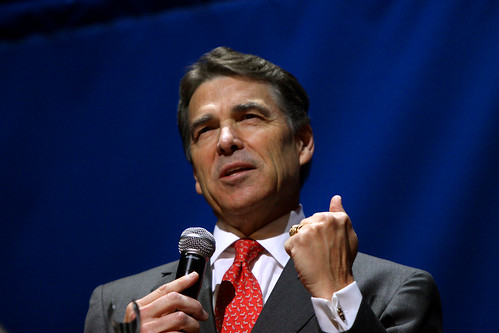 Is Rick Perry actually a closeted homo with a meager endowment?

Maxey, the first openly gay member of the Texas State Legislature, spent the better part of his summer working with a reporter from a “national news oulet” nailing down all of Rick Perry‘s dirty secrets for this obvious best-seller.

Gawker got its hands on a copy and it sounds like the juiciest bits come from “James,” a real-estate agent who posted a Craigslist ad for sex that Perry allegedly responded to.  James says of the encounter: “It lasted about a minute. He had a little dick. It was the worst fuck of my life.”

[Maxey]  located two men who claimed to have had sex with Perry. One was a male prostitute who told associates that Perry had hired him three or four times a year for hotel parties with Perry and an aide. The other was a man who responded to a Craigslist ad allegedly posted by Perry. Along the way, there are dozens of other more tenuous second-hand reports, including one man linked to Perry who pointedly refused to deny the accusations.

It’s all very anonymous and hazy and who knows if any of it is true. But the fact that this is coming from a fairly prominent Texas political figure brings it out of the realm of pure rumor and offers an engaging little glimpse into how your news sausage is made (or in this case, not made).

Even given his political cred, Maxey’s been out of politics since 2003—and this big-time reporter of his is unnamed. So the veracity of this claim is indeed questionable.

That doesn’t mean we’re not going to download the Kindle version on Amazon for some, um, light weekend reading. It’s only $9.99!