Talking to Tal Granit and Sharon Maymon feels a bit like playing tennis…in the role of a tennis ball. The longtime collaborators bounce thoughtful statements off one another like seasoned pros able to match each other point for point amid giggles and wry remarks.

That chemistry provides a great creative formula that has allowed the two to co-direct five films together. Their latest project, Flawless, made its US debut at the Tribeca Film Festival, and is one of the standout entries this year. The movie follows Eden, a 17-year-old transgender girl (played by transgender model Stav Strashko) as she enters a new high school. Having been yanked from school to school every time she’s outed as transgender, Eden has a bit of trouble making friends until she meets Tiggist (Netsanet Mekonen) and Keshet (Noam Lugasy), who don’t feel pretty enough to get invited to the prom.

When Tiggest and Keshet reveal to Eden their plans for paying for secret plastic surgery, the story takes a thrilling twist as they engage in a life-threatening plot to fit a beauty ideal.

Queerty managed to get Granit & Maymon on the phone following the Tribeca premiere.

Your film really reminded me of Bo Burnham’s film Eighth Grade, in that they’re both about teenagers struggling to love themselves in the era of influencers. Where did this story begin for you?

Sharon Maymon: I saw a news report on TV about two Israeli girls who sold kidneys and had a breast enlargement in Turkey. I was shocked by the story and I told Tal about it. She said, “This is going to be our next film.” Usually, we deal with social issues and experiences like body image. This was like another piece in the puzzle.

Now, correct me if I’m wrong, but neither of you identify as queer. I couldn’t find anything in my research…

Tal Granit: We both identify as gay.

SM: We are both gay. We are both gay parents. I raised my children with my boyfriend. Tal is raising her child with a gay couple. So yes, we belong to the LGBTQ community.

We’re happy to have you on the team.

TG: It’s funny we’re discussing this. I have the Pride Flag on my shoes.

Your opening scene is quite striking. I don’t know of another film that opens with a man riding a horse through a school to ask a girl to prom.

SM: Even that is based on a true event.

SM: A girl was invited to the prom when another student brought a horse to school to ask her.

Is that really how they work in Israel? Is that kind of elaborate pomp customary?

TG: Yes. In the last few years, it became very, very popular. Kids spend a lot of money on the prom to make it like here in the US with limos, hairdressers, make-up artists. They go for the whole thing.

That’s amazing. That’s not how we did it when I went to prom.

TG: Mine as well.

Amazing. Also amazing: Stav is an amazing discovery. She looks like she stepped out of an Antonioni film–she’s very charismatic. That said, she’d not really acted much before. How nervous were you about casting someone so inexperienced?

TG: I’ll tell you, we were very concerned about finding a transgender actress. We felt that Eden is someone fighting for an inner truth. It would be a total lie to cast a cisgender actor in the role. So we went for one year and met almost any transgender teen or young woman we could meet. We had a lot of auditions. We worked with a transgender teenage girl. And we couldn’t find our Eden. We actually had to halt production and say to the producers, “We cannot do this movie.”

TG: They told us to take a week off and then Sharon read an article in Teen Vogue where Savi told everyone she’s transgender. She identifies as transgender. A couple of days later we spoke with her. She was in New York and we were in Israel. We did a Skype audition where we fell in love with her. When we met her, we knew we could make it with her. She really identified with the character. She knew all these things from her own experience, and she’s very talented. So when we found her, we felt secure.

She’s quite good in the movie. You really layer your characters in this film. Keshet and Tiggist, Eden’s school friends, are incredibly cruel but also incredibly naive and caring. Meir, Eden’s father, loves his daughter and wants to protect her, but still can’t understand what it means to be transgender.

Related: Ofir Trainin on ‘Family in Transition,’ and the rise in Israeli trans & homophobia

Keren, the woman who sets the girls up on their surgeries, in a way, is the most complex character. She comes off as someone who genuinely likes Eden and who wants to help people. But she has her violent outbursts of anger and cruelty. In her mind, is she trying to do the right thing?

TG: Obviously she’s not doing the right thing. It’s terrible. But I think that the complexity comes from her being the only person willing to see both Eden and the girls for her needs and [for their own]. They don’t have someone to turn to, you know? Someone to guide them. If they had someone to guide them, a positive role model, they wouldn’t be selling their own flesh and blood.

You mentioned the news story earlier. Is this widespread in Israel as well?

SM: I think it was a one-time story.

TG: But there was cooperation between Israeli doctors and Turkish doctors to do it for a while to put organs on the black market.

SM: We saw an interview with the doctor who did it, and he really believes he did the right thing because he saved people’s lives.

TG: When you think about it, it’s really complicated. God forbid, but if a child or someone close to me needed a transplant, and there wasn’t any [donor], wouldn’t I do everything to save them? It’s very, very complex. It should be organized though, without pay.

TG: Altruistic, yes. It should be done without exploiting the young or very poor.

It’s frightening in any case. One of the themes of this film is transphobia. You also touch on racism, homophobia, sexism. You touch on anti-immigrant sentiment. You touch on economic classism. These are all issues we’re dealing with in the United States at the moment. Is there a similar climate in Israel?

SM: I co-wrote the film Skin which won an Oscar. This year it was the short that won the Academy Award. It’s about racism. In all our films we deal with social issues, combining them into a genre.

TG: Tell him why you wrote it.

SM: Yes. The idea for the film came from the outcome of racism in Israel last year against the Ethiopian community who rebelled against this racism. One token guy was shot. The thing is, in Israel, color still matters.

SM: Do you know Avera Mengistu? He’s an Ethiopian, a young guy held by Hamas for three years. And nobody knows about it.

TG: We thought about that a lot because we think [his story] is reflective of the situation in Israel over the past ten years. Economic gaps are getting bigger and bigger. Racism continues. Also, we are now in a very strange era because although the LGBTQ community is in good condition, there might now be an education minister who is homophobic and says we are dogs. We could lose everything that we gained.

It sounds much as it is here: scary.

SM: Our solution is to make this kind of movie and deal with those issues. When we grew up in Israel, we did not have a good role model. That was the reason we wanted to place an LGBTQ character in the center of the film. 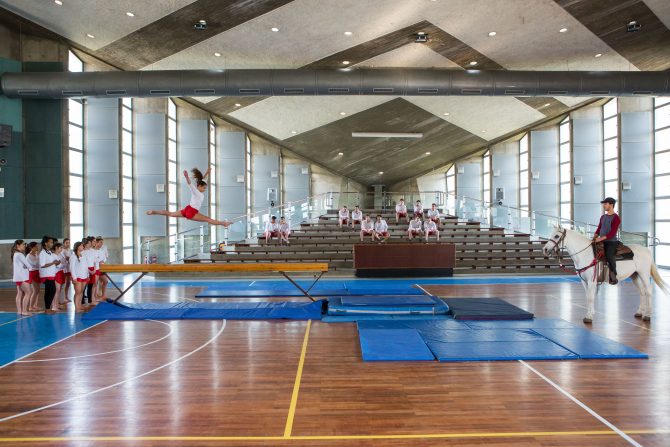 That’s powerful. Talking to co-directors is always so interesting because of the power dynamic. How does the creative process work between the two of you?

TG: We’ve been working almost 16 years together. We’ve done five films together. We, you know, we’re sort of a married couple without the sex. We meet every day. We work. We write every day. We argue a lot, but I think the outcome is the best way for us to combine our ideas.

How do you challenge each other?

SM: You know sometimes we argue about a word in a sentence for three or four days. We usually argue it a lot. But you know, from the first idea to the third one, we know the idea is better than the previous one. Also, sometimes we can do another take, and in the editing room, we don’t even remember–

TG: –Whose version was whose. The things that interest us are the same, as Sharon says. We care about what’s going on. It was very important for us to make a positive ending to the film for Eden. We cannot take any more movies where the gay or transgender or lesbian character dies in the end. We wanted to give another option to life for our community so teenagers could have a role model.

Your films often explore characters that are in a state of desperation. What attracts you to the subject?

SM: We usually swim against the currents. That’s our life. Our characters are rebels fighting for their inner truth. That’s what we’re doing in our lives raising our families and fighting for equal rights in Israel. Stav is a role model. We are proud that people can look up to her. When they watch the film, they will see that we remember that period in our lives. I remember sitting in a room and thinking I was all alone in the world and had done something wrong. Today, you can find a role model to help find your way out of the situation.

TG: I agree with you. In The Farewell Party, the main characters were old people You also don’t see old people on screen as the heroes of a story. There was a gay couple there also. When we screened the film abroad, young teenagers said: “We know there are gays in the world, but we didn’t know old people can be gay!”

TG: We heard about the “agenda” in [Queerty’s] headline. We like it very much.