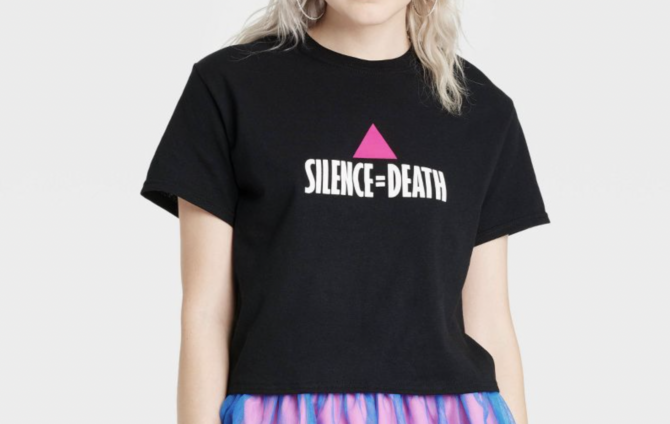 A new Pride season is nearly upon us, which means a brand new array of trendy queer merch from Target. Unfortunately, among the adorable rainbow jumpsuits and inclusive “they/them” pin sets is a piece that has one historic LGBTQ organization speaking out.

In a collab with queer clothing initiative The Phluid Project, Target has released an online-exclusive black t-shirt featuring an inverted pink triangle with the phrase “SILENCE=DEATH” along the bottom. Sound familiar?

Historic AIDS advocacy foundation ACT UP took to Twitter to confirm that neither Target nor The Phluid Project asked for permission to use the iconic SILENCE=DEATH artwork. Worse, they also confirmed that, at present, they aren’t receiving any proceeds either.

We can answer that for you: No. Both @Target and @phluidproject did not get permission to use “SILENCE = DEATH” art. We have been fighting the commodification of AIDS for years and this is the latest edition. If you want to support our work buy from us: https://t.co/MxdVFQEypz https://t.co/1b7s4kEx2m

ACT UP is calling on supporters to buy directly from their site – which honestly seems like it’s working out in their favor! At time of writing, their merch site is fully down due to high traffic volume.

It was working a few moments ago! We’re probably not used to high traffic on the site — be patient!

This whole situation seems like an uncharacteristic misstep for Target, a company that has donated millions of dollars to queer organizations like GLSEN, HRC, Out & Equal, and more. If nothing else, releasing its yearly Pride collection in the face of constant calls for boycott from dusty homophobes has put them ahead of plenty of their retail contemporaries in our book.

Let’s all just hope that this situation gets cleared up ASAP so we can get back to losing an afternoon blissfully wandering their aisles guilt-free.

Queerty has reached out to Target for comment and will update this story with any further response.