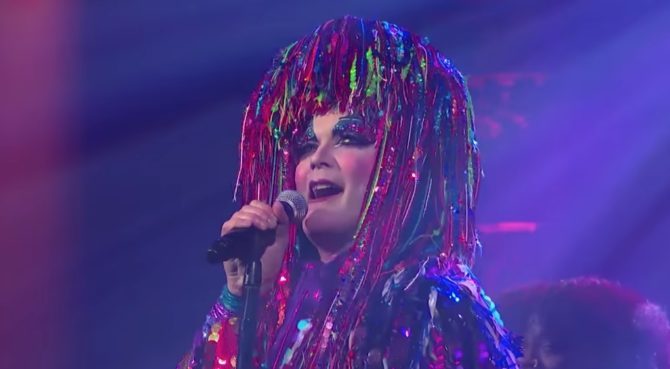 Who he is: Performance artist, maximalist chanteuse, oral historian, raconteur

The astounding spectacle wove together queer history through song and spoken word, bringing audiences to fits of laughter and tears — sometimes simultaneously.

Mac received a MacArthur genius grant for the work, and the show was a finalist for the Pulitzer Prize for drama in 2017. It also won the Kennedy Prize for Drama inspired by history.

Most recently, Mac wrote the play Gary: A Sequel to Titus Andronicus, which premiered on Broadway in April 2019 and received seven Tony Award nominations.

Why we’re proud: In a world where drag has risen to the mainstream, Mac operates on a separate galaxy entirely. His shows are wholly unique experiences — political, subversive, and ultimately uniting for the audience, much of which skews queer.

“Taylor is very much the fool in the king’s court talking truth to power. That is something you could miss if you were just looking at pictures,” Matt Ray, who collaborated with Mac on “24-Decade” as music director and arranger, said of the over-the-top performer in a Washington Post profile. “This is a giant community-building project.”

Audiences walk away from Mac’s shows with their souls fed, feeling connected to one another and themselves, which is some of the highest work that can be done in a theater.

That he’s managed to do so by pulling at the thread of queer existence through time and space in such a phenomenally entertaining way seems to defy physics, but anyone who’s been lucky to occupy a seat at one of Mac’s shows knows it’s as real as can be.

Here’s Mac on The Tonight Show with Stephen Colbert last year, dipping into politics and explaining the pronoun “judy” (note: we didn’t use it on this post to avoid confusion and because Mac has also expressed he’s perfectly fine with “he”):