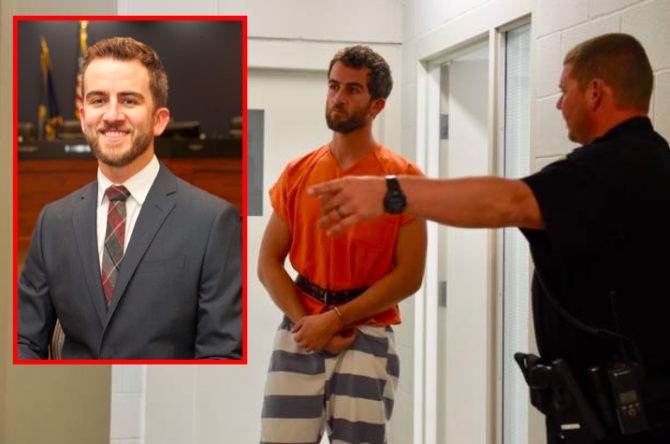 Justin Adrian is a high school social sciences teacher and Shawnee City Councilman from Shawnee, Kansas. Or rather, he was until he hooked up with a student last month in his classroom during school hours.

According to recently released court documents, Adrian and the student first connected on Grindr on September 6. They quickly recognized one another and continued chatting on the app and on Snapchat.

The conversations became “sexual in nature” and on September 7, the two met in Adrian’s classroom at Olathe East High School for a hookup during the middle of the school day.

Adrian locked the door and the two allegedly engaged in a sexual act. After they were finished, Adrian gave the student a pass so he wouldn’t be marked tardy to his next class then ushered him out through a back door of the classroom.

The student was 18 and of the age of legal consent; however, it is against the law for teachers to engage in sexual behavior with students at their school.

When the student’s parents learned about what happened, they contacted school officials. When questioned by administrators, Adrian confessed to everything and was immediately fired.

He also resigned from his post on the Shawnee City Council.

Adrian was arrested but has since been released from custody after the judge in his case reduced his bond from $250,000 to $50,000. He is facing one felony charge of unlawful sexual relations. If convicted,  he could spend over two and a half years in prison.

Adrian is due back in court on November 7.