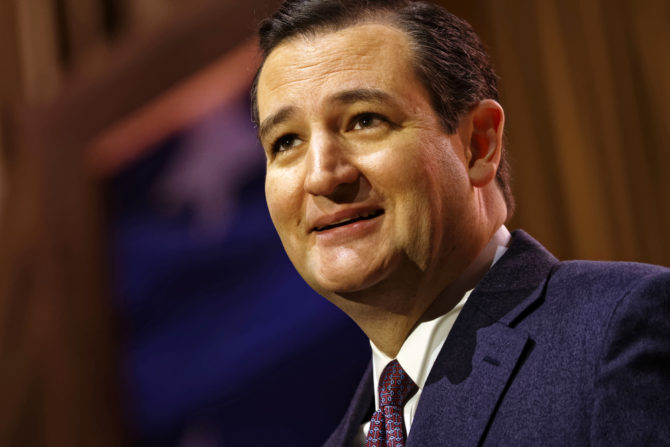 As coronavirus rages across the state of Texas, Senator Ted Cruz was spotted not wearing a mask on an American Airlines flight from Houston to Dallas last Sunday. Now, he’s being dragged on Twitter for it.

After the photos of the senator went viral, a spokesperson for Cruz said he definitely wore the mask during the flight and merely “removed his mask to drink and put it back on afterward.” But photos show Cruz not wearing a mask on the airplane or at the gate.

American Airlines seems to think they can ignore our calls to ban Senator Ted Cruz from future flight for refusing to wear a mask.

The official American Airlines policy states that all passengers, except young children and those with health conditions that prevent them from doing so, must wear masks aboard their aircrafts, except when eating or drinking.

After photos of Cruz violating this policy began circulating, the airline tweeted yesterday that it was looking into the matter, saying, “We committed to protecting the health and safety of all customers, and we are reviewing the details of this matter.”

We are committed to protecting the health and safety of all customers, and we are reviewing the details of this matter.

It followed up with another tweet this morning saying, “We’ve reached out to the senator to affirm the importance of our mask policy as part of our commitment to health and safety.”

We’ve reached out to the senator to affirm the importance of our mask policy as part of our commitment to health and safety.

Meanwhile, Twitter has quite a bit to say about the matter…

My mom once told me,
“Son, during a pandemic always get your medical advice from doctors! They’re informed, experienced, & saving people’s lives is their priority. Don’t ever listen to former reality tv stars & game show hosts. And never, ever do what @tedcruz does.”
Thanks, mom.

You’d think with a chin like that you’d be happy to have an excuse to hide it. #TedCruz #BanTedCruz pic.twitter.com/gGc9msGxJr

Is the policy that everyone except Ted Cruz has to wear a mask?

Ted Cruz is a better person than Donald Trump and Ted Cruz is one of the worst people alive.

Ted Cruz won’t stand up for his wife or father against Trump’s attacks. That is all anyone ever needs to know about him. For sure, he wouldn’t wear a mask. Why would he? He is entitled, arrogant, reckless and unworthy of his high office. He is the perfect archetype for this age

I checked the Ted Cruz exemption box so I don’t have to wear a mask on my flight pic.twitter.com/obARPFtx8q

Can’t expect Ted Cruz to care about protecting the health of everyone else around him when he couldn’t even be bothered to protect his wife from a bully who called her ugly.

So Ted Cruz is above the mask rules…got it!
Don’t plan to fly anytime soon, but will remember this American Airlines!!🧐

When I see this, I’m reminded that the people aren’t our biggest problem, their leaders are. I’m also reminded that Ted Cruz is a complete asshole. #Resist #WearAMask pic.twitter.com/VR4hzhOrQ9