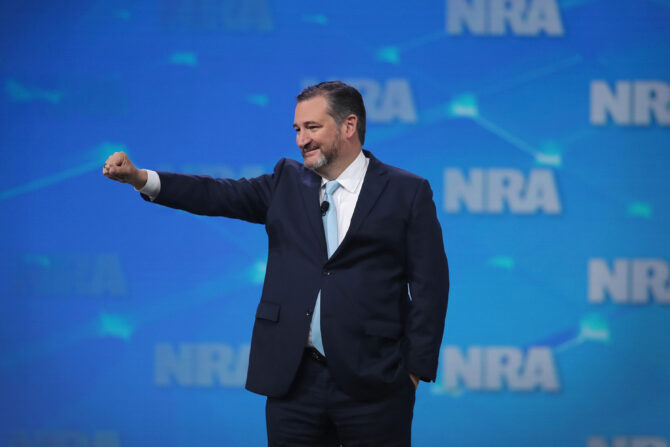 The blood on Ted Cruz’s hands from yesterday’s elementary school shooting in Texas is apparently not going to be enough to keep him from giving the NRA a resounding round of applause at their convention on Friday.

Cruz has received over $175,000 dollars in donations from the NRA over the course of his political career. Under Cruz’s senatorship, Texas has become the state with the highest number of gun deaths in the country, according to the CDC’s firearm mortality stats.  In the face of it all, the anti-LGBTQ seantor refuses to recognize the lethal implications of his massive gun lobby support.

Related: Tomi Lahren said something stupid about yesterday’s school shooting and Twitter is NOT having it

Now, even after this week’s shooting at Robb Elementary School in Uvalde, Texas that left 19 children and two adults dead, Cruz and his fellow gun enthusiasts Greg Abbott and Donald Trump are still set to speak at the NRA convention in Houston this weekend.

This convention not only celebrates gun ownership and open legislation, but it will also be a marketplace for weapons and ammunition, which is especially concerning for a state that no longer requires licenses or training for some gun owners.

The callous and brazen decision by Cruz and others to carry on with a gun rally in the same state that over a dozen children were just gunned down in has left many people on Twitter beside themselves with anger.

Aren’t you slated to headline a speaking gig for the NRA in three days – in Houston, no less?

You can do more than pray. Faith without works is dead. https://t.co/NMX64KljhL

Parents are staring at empty beds tonight while @tedcruz and @GovAbbott are practicing speeches for the NRA.

There isn’t a word in the english dictionary to describe how angry that makes me.

The NRA conference is THIS Friday. In Houston, Texas. Nice timing, a**holes. Speakers include Ted Cruz and Gov. Greg Abbott, who boasts an A+ rating from the same NRA. Are they worried? No. The conference area is a “no gun” zone. They’re brazen, greedy, and shameless, not stupid.

Senator Ted Cruz of Texas and Governor Abbott are speaking Friday at the NRA annual meeting on Friday in Houston. DAMN THEY CANT EVEN FUCKING WAIT UNTIL THE BLOOD OF THE CHILDREN IS WASHED AWAY. THE INDECENCY!

Does the NRA give Republicans a bonus with each mass shooting, or is it an annual flat fee? How does that work @tedcruz @MittRomney @LeaderMcConnell?

But you need campaign money from the NRA, so you’ll do nothing but give a useless tweet and then flee to Cancun.

19 children & 2 teachers were gunned down today in Texas & 72 hours later Greg Abbott, Ted Cruz & John Cornyn will be featured speakers at an NRA convention in Houston. Then 50 GOP senators will make sure absolutely nothing is done to address this sickness. This is disgusting.

The NRA paid good money for Ted Cruz to have no spine.

Stop the slaughter. Do something and act like you care about children dying for your debt to weapons makers.

Just to be clear fuck you @tedcruz you fucking baby killer.