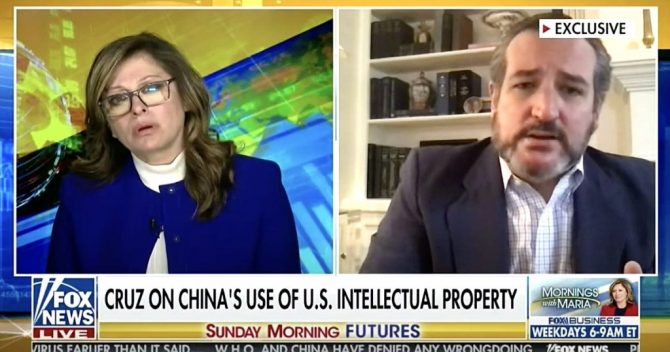 Dr. Suess lover Ted Cruz has caused us to do a double-take, criticizing Hollywood for censoring scenes featuring LGBTQ content from major movies for Chinese markets.

Cruz made the charges during an appearance on Fox News to promote a new piece of legislation he calls the Script Act. The bill would block Hollywood studios from making changes to their films to appease the Chinese government.

“It really is tragic that Hollywood has been willing, over and over again, to kowtow to the Chinese communists and let the Chinese government censor American movies,” Cruz told host Maria Bartiromo. “We’re saying Maverick is afraid of the damn Chinese communists,” he added, referring to the film Top Gun.

“The Chinese communist government wanted them to edit out part when [Freddie] was gay?” Bartiromo charged. “How do you tell the story of Bohemian Rhapsody and not say that Freddie was gay?”

“You don’t,” Cruz spat. “But Hollywood was more than happy to edit the scene out. They did it because the Chinese government didn’t want to acknowledge that Freddy Mercury was homosexual. Look, that’s a huge part of the story! The problem is Hollywood is more interested in making millions of dollars from the Chinese market than they are in free speech, than they are in artistic integrity.”

For the record, friends and family say Mercury was happily bisexual. Cruz’s odd defense of LGBTQ content in films appears to be part of a larger Republican strategy to vilify the Chinese government. In the past, Cruz has labeled marriage equality one of the “darkest” moments in US history.

As for his sudden defense of queer visibility in movies…well, even broken clocks are right twice a day.