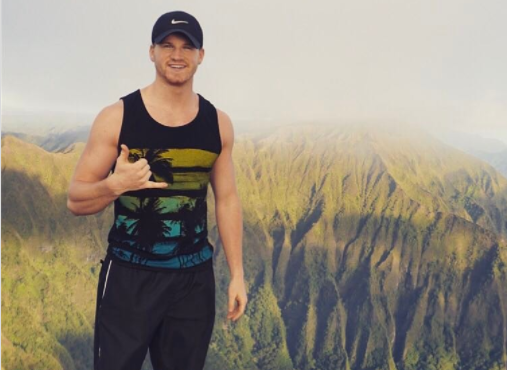 For 18-year-old Preston Cope, life has not been easy.

“For the past two years I have had a constant battle inside my head about who I am,” he writes in a power new essay published by Outsports. “My brain wanted nothing more than to be straight. I wanted to be the person my family and friends expected me to be. I just wanted to be ‘normal.'”

Preston grew up on a farm in rural Ohio. He knew early on that he was gay, but he kept his feelings buried out of fear of how his family and friends might respond.

I would hear things like my aunt telling a joke at a family holiday about Elton John and his sexuality. Or my cousin talking about those “stupid gays.” Or my Mom saying “ewww” when a same sex couple kissed on TV. Or my uncle saying, “I don’t really care for them” when talking about gays. Or my neighbor telling me that “it is a sin and they are all going to Hell.” These are only a fraction of things I have heard, and while they seemed innocent to the person saying them, they were absolutely scarring to me when trying to come to terms with myself.

When he was 15, after years of denying it, Cope admitted to himself that he was gay.

“I saw myself as disgusting, as a disappointment, and as a failure,” he recalls, “I thought that if my mom reacted negatively to the same sex couple on TV, then she would surely find her own son disgusting.”

I would go to bed every night praying, begging, and pleading to just wake up straight, but the only thing I woke up to was disappointment. I could not change and this led me to absolutely hate the person I saw in the mirror.

I would get so mad at myself for not being able to be attracted to girls and it made me hate myself even more. I even became envious of straight couples. The best way I can explain it is that I was mourning the death of the person I would never be, while simultaneously hating the person I was.

As Cope’s depression worsened, he became “mentally exhausted” and started to feel suicidal. Sadly, his father had committed suicide years earlier, and so, he says, it seemed to him like “a very viable option.”

“If I could not change, I did not want to live,” he writes. “I wrote down my goodbyes and made three suicide videos — one for my mom, one for my sister and one for the rest of my family.”

But when the time came, however, Cope balked.

“For some reason I wasn’t strong enough,” he explains, “or I was strong enough not to go through with it; it depends on how you look at it.”

That’s when he turned to weightlifting.

Even on my worst days, lifting was a positive outlet that just allowed me to breathe for a second when the rest of the time I felt like I was trapped in this bubble that was getting smaller and smaller. Even if it was just for a minute I would get the feeling of “everything is going to be OK” and that gave me enough strength to get through the next day.

He finally found to courage to come out to his mom, who was more supportive than he ever could have imagined. He also started seeing a therapist. And, of course, he continued lifting.

Today, Cope admits that he’s still working to accept the things about himself he cannot change, but he’s on the right track. In May, he graduated as a valedictorian of his 2017 high school class. He hopes by sharing his story he might help other LGBTQ teens.

“As I write this I am not publicly out yet, however by the time this is published I will obviously be,” he writes. “Just as the more courageous people who have come out before me and told their stories, I hope to help anyone struggling with their identity. I hope to help raise awareness about mental illness and help to end the stigma surrounding it.”

The view from the top was well worth it! If you look closely you might see a velociraptor in the back. #hawaii #thestairwaytoheaven

That face you make when all you want to do is be sunburnt and have cool surfer hair in Hawaii, but your stuck in cold Ohio for a couple months with school? #help

It's easy to get caught up in this fast paced world. Sometimes it's good to just sit back and think for a minute.