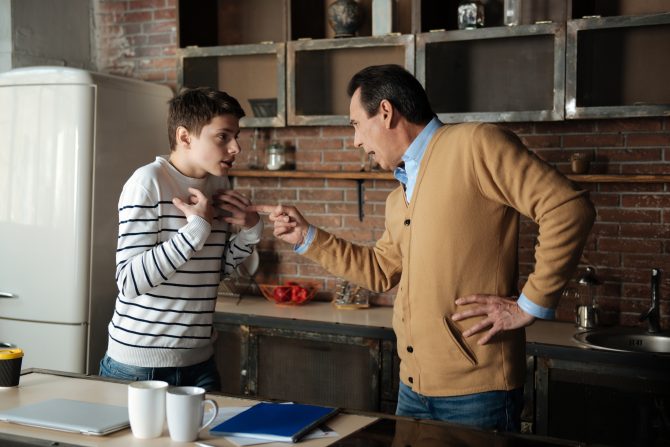 LGBTQ+ people deserve to come out to their family members when they’re ready, so it’s understandably nerve-racking when a loved one tries to rush the timeline. Take the Reddit user, for example, who feels like his mom is “forcing [him] to come out.”

This 18-year-old writes that he came out to his mom about two years ago and that she has talked to him about his sexuality a few times since but “that was pretty much the end of it.”

“I was fine not really talking about it with her,” he adds. “I’m fairly comfortable with my sexuality but it made me anxious with her for whatever reason and I’d avoid bringing it up at all.”

About a month ago, however, this teen’s mom started pressuring him to come out to his father, and that prospect gives him pause. “My dad’s pretty openly homophobic,” the teen continues. “He makes comments all the time, and I’ve heard him on the phone with some of his bigoted friends. And I know he’s a big softie, but he still scares me sometimes. (He grew up in eastern EU and has a thick accent, gets super loud, frets about really trivial shit constantly.)”

The mom, for her part, believes the dad will always love his son. “And I do believe that,” the Redditor adds. “I’m just not comfortable coming out to him while I’m still living with them. I don’t think he’d do anything crazy, but I’m not super about it. … She went on about how, ‘Oh, well, you’ll be at university next year, and we want to be a part of your life. If you get into a relationship, are you just going to cut us off from that part of your life?’ And it’s been making me feel a lot of guilt — like, if I don’t come out and be open about who I’m dating, then it’s because I’m disrespecting them or something.”

So now this guy is turning to the users of r/askgaybros for advice. “Has it been long enough that I should just rip off the Band-Aid and tell him?” he writes. “I’m not sure if I’m worrying over nothing, or if my feelings are justified. Would it really be disrespectful to not let him in on who I really am? Even if it doesn’t change much from the me he already knows, I don’t think that’s how he’ll feel. I feel like he’s gonna feel a lot of shame for the family and that my life is a sham.”

As of the time of this writing, only one user has commented on the post, but that sole comment bore sage advice. “I’d say try to explain your discomfort to her, and that you just want to wait until you’re not living together, and emphasize that you don’t want to cut them out of your life at any point,” the commenter wrote. “It sounds like your mom is really great and wants the best for you but doesn’t fully understand what you’re dealing with and how you’re feeling. Do your best to explain it to her.”

What advice would you share with this guy as he works toward living his authentic life? Sound off in the comment section below.