When Bradley Cooper was caught smooching Matt Bomer on the set of Maestro, the Netflix biopic about Leonard Bernstein, the photos once again ignited the buzz about straight actors playing gay roles. Should these parts go to actors who are gay, and face the criticism and professional discrimination of coming out publicly?

Social repression of sexual orientation and gender identity aside, there are many movies starring straight actors that have been beautifully made, and presented wonderful portrayals of queer characters. Here are 10 great examples of when straight actors played gay and the results were fantastic: Both a love story about two men in the American West, and a stark tale about the horrors of homophobia in America, Brokeback Mountain was revolutionary when it was released in 2005. The movie earned $178 million in ticket sales and proved that a gay love story–that showed sexual intercourse between two men–could be a mainstream commercial success. Director Ang Lee won the Oscar for Best Director, and the movie was nominated for Best Picture, which resulted in quite a scandal when it didn’t win. Fun fact: in 2006, Heath Ledger was invited to present an award at the Oscars ceremony, but he refused because the opening monologue included a derogatory joke about the actors’ portrayal of having sex. “It’s not a joke to me,” he explained to co-star Gyllenhaal. “This is about love.”

Patrick Swayze, John Leguizamo, and Wesley Snipes, To Wong Foo, Thanks For Everything, Julie Newmar (1995)

Patrick Swayze was a major Hollywood star when he joined the cast of To Wong Foo as Vida Boheme, a drag queen with a delicate voice and a powerful punch. Vida, her bestie Noxeema Jackson (played by Wesley Snipes) and a young drag princess-in-training Chi Chi Rodriguez (played by John Leguizamo) set out on a road trip across the U.S. but get stranded in a dusty Texas town. And of course they change everybody’s lives through the powers of love and hairstyling. Wesley Snipes, in drag from beginning to end of this movie, is a revelation.

Theirs is not the most refined of Hollywood pedigrees: Meg Tilly is best known for voicing a murderous doll in the Chucky slasher series, and Gina Gershon will forever be worshiped for her camptastic role as Cristal Connors in Showgirls. But once upon a time, they were both absolutely delicious and exhilarating in the crime thriller Bound, playing two women who hook up, fall in love with each other, and then try to steal a lot of money from the Mafia. This movie is good old-fashioned edge-of-your-seat fantastic storytelling, and everyone looks gorgeous. Fun fact: Bound was the first major movie by The Wachowskis, the trans women who are most famous for making The Matrix series. 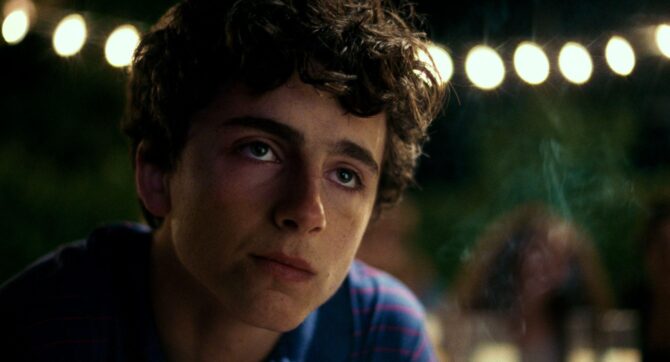 Call Me By Your Name has its problems. The on-screen relationship between schoolboy Elio, played by Timothée Chalamet, and the very adult Oliver, played by Armie Hammer, sometimes seems to be a bit predatory. And then there is the fact that Armie Hammer has revealed himself to be a creep in real-life. But Chalamet’s on-screen magnetism (and legendary jawline) rises above the awkwardness of the casting. He was christened the “Straight Prince of Twinks” by fans of the movie, a title that he has accepted graciously, and it is hard to imagine any other actor in this role. If you can watch the final, one-shot scene by the fireplace and you don’t experience an emotional breakdown of your own, you’re simply dead inside. 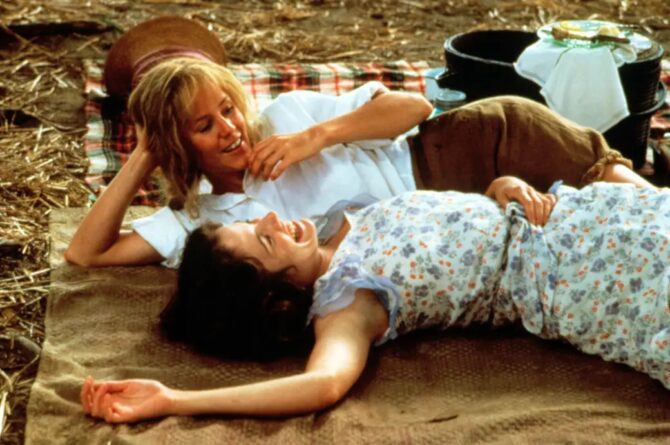 In the original book Fried Green Tomatoes at the Whistle Stop Cafe, the characters Idgie Threadgoode and Ruth Jamison are two women in a romantic relationship, the entire town knows about it, and everybody just minds their own business. When Idgie is accused of murder, even the town’s pastor comes to her rescue. But when book was made into a movie, studio executives caved into social pressure about lesbians in mainstream movies, so the Idgie/Ruth relationship was sterilized to the point of making them just good friends. Fortunately, Mary Stuart Masterson (Idgie) and Mary Louise Parker (Ruth) crafted enough meaningful glances, breathless pauses, and lingering moments that conveyed the true nature of their connection. It passed the scrutiny of Hollywood censors, but anyone with a shred of gaydar–or even just an appreciation of seeing two people in love–was able to pick up on what was really going on.

Related: Tom Hanks explains why he wouldn’t play the gay role he played in “Philadelphia” today Trevante Rhodes was a new actor when he was cast in Moonlight, a superb movie about a gay boy named Chiron who is tortured by bullies, and then tries to teach himself that he is worthy of love. Rhodes plays the lead character as an adult, and it all comes down to that scene in the diner, when Chiron comes face to face with the man who is the love of his life. Moonlight won the Oscar for Best Picture, and the entire movie is heartbreaking, breathtaking, and beautiful.

Priscilla, Queen of the Desert wins the award for best casting: Hugo Weaving (the actor who played Agent Smith in The Matrix, and also Elrond the Elf King in The Lord Of The Rings movies), Guy Pearce (the bad guy in Iron Man 3) and Terence Stamp (General Zod in the Christopher Reeve Superman movies!), star in Priscilla as three drag performers from the nightclub scene in Sydney, Australia, who are trying to drive across the Australian outback to get to a job and then their bus breaks down in the middle of nowhere. And of course hijinks ensue. (Was this the inspiration for To Wong Foo? Obviously.) All three actors are absolutely hilarious in this delightful movie, but the best performance was from Terence Stamp, as a transgender woman who  serves as a mothering figure to her two friends. Stamp is a Broadway legend, a true artiste in the acting craft, and his performance is one of a very, very small group of cisgender actors who have played trans characters and gave a performance that is worthy of respect. 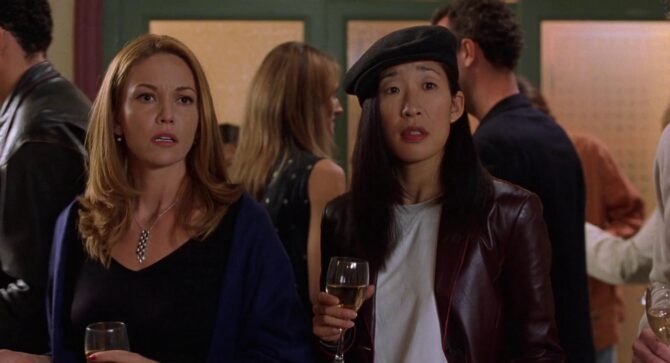 There is much to love about Under The Tuscan Sun. The cinematography is stunning. Diane Lane, playing the lead role of Frances, meets a hot Italian guy named Marcello, has cocktails with him on the beach, and then wears him out in bed all night. Then there is Sandra Oh, as Frances’ best friend Patti, a lesbian with a deadpan sense of humor who has a messy breakdown in Frances’ Tuscan villa after being jilted by her spouse. Sandra Oh is no stranger to queer roles; note her love affair with a psychotic lesbian in Killing Eve. And Sandra Oh is one of those actors who just makes everything better. 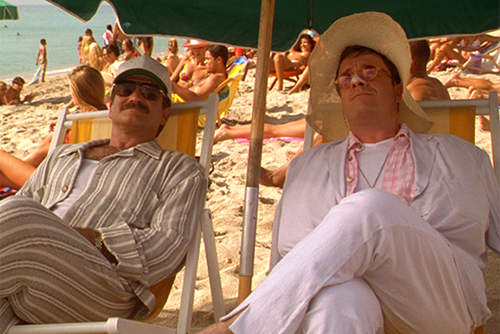 The Birdcage is based off of the French play La Cage Aux Folles, which was adapted into an excellent French movie and then a hit Broadway musical, and by the way the French film is available on various streaming services and is a must-see. But back to the U.S. version: Robin Williams stars as Armand, a gay man who owns a drag club in Miami Beach, and is perpetually exhausted by his high-maintenance longtime partner Albert (played by openly gay Nathan Lane). Williams gave a refreshingly understated performance in this movie, especially considering his usual cocaine-fueled antics, and playing Albert as a gentle, soft-spoken, and kind soul made the character more realistic and relatable. An honorable mention should also go to Hank Azaria, in the role of their housekeeper Agador, who is ridiculous and has an inexplicable accent and is also very funny. 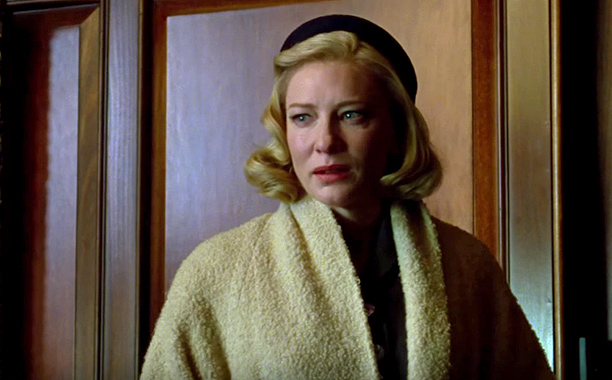