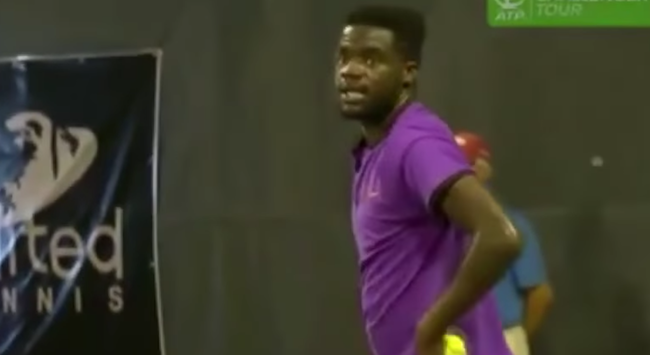 On Tuesday, a tennis match between Mitchell Krueger and Frances Tiafoe was rudely, sensually interrupted by the distinct oohing and aahing of people having sex.

The licentious scene took place at the Sarasota Open in Florida.

Krueger and Tiafoe momentarily stopped swinging to pause and meditate on an altogether different kind of swinging.

Meanwhile, announcers told the excited crowd that they were indeed hearing the sound of two people in the act of making the sweetest love.

“Well that is… the most bizarre situation,” the announcer quipped. “I don’t know how to put this folks but somebody’s phone is going off in the stands. And it was an adult video.”

Seconds later, the moistened murmurs were heard once again.

“I can still hear it,” the announcer crowed. “It’s still going. What is going on?”

Tiafoe exclaimed, “It can’t be that good!” as the crowd erupts in hysterics.

“Nope that’s not a phone,” the announcer says, calling it like he sees it. “That’s an apartment across the lake.”

Tiafoe later took to Twitter to confirm that the love was real:

@MattReid12345 @MikeCTennis never seen something more real it was amazing