Terry Crews  ignited a Twitter firestorm over the weekend after criticizing a New York Times op-ed on parenting.

It all started when Crews tweeted out a link to an essay titled “Why does Obama scold black boys?” penned by lawyer Derecka Purnell which criticized former President Barack Obama for remarks he made to young black men about how to grow into successful, healthy adults.

The former NFL linebacker and current star of Brooklyn Nine-Nine attacked Purnell for being a woman speaking about obstacles faced by men.

“Another thing that bothers me is that this OP-ED was written by a WOMAN about how boys should be taught to grow into successful young men.” Crews tweeted. “How would she know?”

The tweet attracted immediate backlash for its perceived sexism. Crews denied as much in another tweet: “I REPEAT: Women can speak with us. Just not FOR US.” 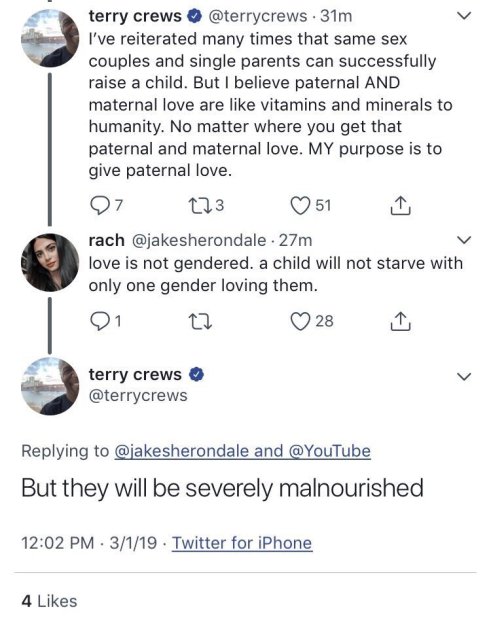 The conversation got even rockier when Crews tried to advocate traditional gender roles and male-female parenting. Never a good argument.

“I’ve reiterated many times that same-sex couples and single parents can successfully raise a child,” he tweeted. “But I believe paternal AND maternal love are like vitamins and minerals to humanity.”

When a follower pointed out that a child “will not starve” for having two loving, same-sex parents, Crews responded with “but they will be severely malnourished.”

You apparently thought I was your puppet. But I have a mind of my own, and can see and think very clearly.

The “phobic” tag is the most feared public tag next to racist.

I don’t fear it because I am neither.

Bullies come in all shapes and sizes. https://t.co/wuBRM2SdEo

Crews deleted the exchange shortly thereafter, though not before screen captures of the tweets went viral. Users attacked him for homophobia and sexism, which prompted another fiery response.

“You apparently thought I was your puppet,” Crews said in a tweet.”But I have a mind of my own, and can see and think very clearly. The ‘phobic’ tag is the most feared public tag next to racist. I don’t fear it because I am neither.”

The actor went on to apologize for his statements, admitting that they were poorly worded.

Crews, for his part, has a history of speaking out against homophobia in other areas. Earlier this year, he criticized comedian Kevin Hart for playing the victim after he refused to apologize for homophobic jokes. Crews has also vocally supported the #MeToo movement by sharing his own story of sexual assault.