As previously reported on Queerty, the Texas branch of the Log Cabin Republicans (LCR) have again been turned down for a booth at the Texas State Republican Convention. It takes place May 14-16 in Houston, TX.

2020 represents the twentieth year the LGBTQ conservative group have been denied a booth.

One of those frustrated by the repeated refusal is former Houston Log Cabin Republican president (2016-2020), Marco Antonio Roberts.

Roberts posted a lengthy Facebook post challenging some of the reasons given for refusing the group a convention presence (it partly boils down to an expectation for LCR not to disagree with a principle of the Texas GOP over its belief in “self-sufficient families, founded on the traditional marriage between a natural man and natural woman.”)

One of those responding to Roberts’ post was Sue Evenwel, the chairperson of the Titus County Republican Party and a member of the State Republican Executive Committee. 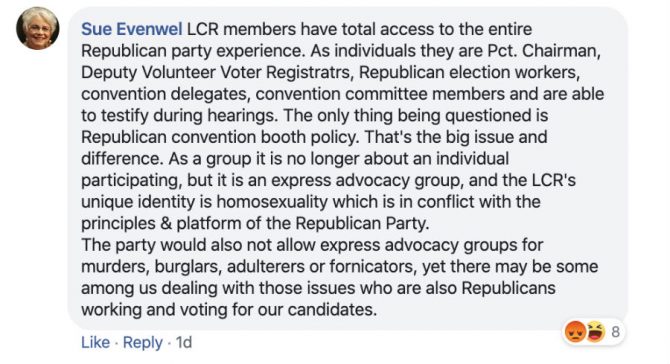 She goes on to say, “The only thing being questioned is Republican convention booth policy. That’s the big issue and difference. As a group it is no longer about an individual participating, but it is an express advocacy group, and the LCR’s unique identity is homosexuality which is in conflict with the principles & platform of the Republican Party.

“The party would also not allow express advocacy groups for murders, burglars, adulterers or fornicators, yet there may be some among us dealing with those issues who are also Republicans working and voting for our candidates.”

“I would like to invite Sue Evenwel to walk through the 2020 RPT Vendor Hall with me and explain the sins of each booth while I livestream her explanations/ justifications,” said Amy Hedtke. “I am 100% dead serious here. Not even a teensy bit sarcastic.”

Another, Sean Ricker, replied, “I think we voted a fornicator and adulterer as our president, and have suggested he is the best ever. But what do I know? I’m just over here doing gay things with my fornicating friends.”

Evenwel is far from being alone in her views about the Log Cabin Republicans. At the GOP committee meeting where the LCR application was turned down, Texas State Senator Bob Hall, 77, criticized the group.

“They don’t have the basic belief in the God of the Bible that we are founded on,” he said.