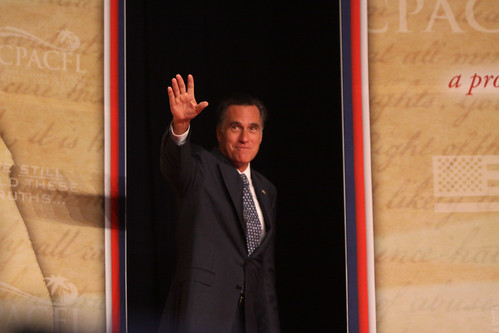 Last night’s GOP primary debate may have focused half-heartedly on the economy. But the real fight for the heart and soul of the party was less about jobs and more about religion, and it took place outside the television networks at the grass-roots level of party theology.
If anyone needed further confirmation of that developing Republican theological crusade (and, really, who hadn’t figured that out already?), the debate raging about whether Mitt Romney is the Brooks Brothers version of Jim Jones removed any doubt.
The crossfire began at the Value Voters Summit last week, when Rev. Robert Jeffress, a Baptist (of course) minister from Dallas and Rick Perry supporter, took a swipe at Romney, proclaiming that Mormonism is “a cult” and Romney “is not a Christian.” As is often the case with the religious right, Jeffress got into trouble for saying what he was really thinking.

To outsiders (raise your hands) the similarities between evangelical Christians and Mormons look to be overwhelming: Church-centered, family-focused, right-leaning and, well, homophobic. But in fact conservative Christians have been wary of Mormons for decades, thanks to some high-energy efforts to portray the Church of the Latter Day Saints as a sort of Salt Lake Scientology. A lot of the effort can be traced to the early 1980s and a movie and book called The God Makers, both produced by ex-LDS member turned evangelist Ed Decker and Dave Hunt, a Christian minister who has called the Catholic Church the whore of Babylon.

The two portrayed Mormonism as a cult in which “the worthy Mormon can become a god himself in the life hereafter, ruling over his own planet, with a number of goddess wives.” Because clearly, if there is anything worse than sex it’s sex in outer space.

One of the criticisms that Decker makes of Mormonism is that it’s really a lavender cult. “Mormonism was and is a hot bed of homosexuality,” Decker writes in one of his books.

Occasionally, the sneaking suspicion among evangelicals that Decker and Hunt are right makes its way out into the open, as it did with Jeffress. However, at least once, these prejudices played to the benefit of the LGBT community: An anti-gay ballot measure looked well on its way to succeeding in Idaho in 1994 until opponents ran an ad pointing out that the folks making commercials for it also produced The God Makers. The measure lost by 3,000 votes, a narrow margin attributed to distrustful Mormons who feared the Christian right might attempt to outlaw them next. Mormon voters may have hated gays as much as the Christian right, but they certainly didn’t want to end up equally hated.

It only goes to prove that the best thing about the religious right is its ability to defeat its own causes—and perhaps, in the case of Mitt Romney, its own nominees.