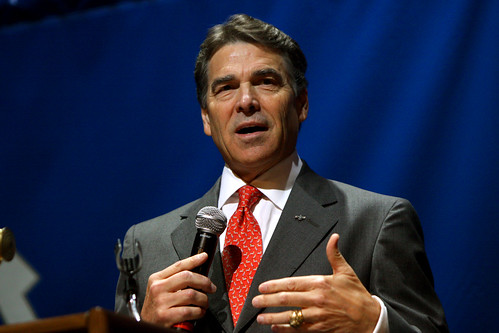 We all know from Rick Perry‘s latest ad that the Texas governor would like a big heaping helping of Don’t Ask, Don’t Tell in his Christmas stocking, which will be hung in front of the mandatory nativity scene at the local public school. No surprise there.

But the real scoop is the behind the scenes battle at Perry’s campaign (which given his poll numbers could be renamed the Alamo). It turns out that the man behind the ad, Nelson Warfield, has a well-documented history of gay-bashing to advance his candidate’s cause. And in a twist that we ourselves couldn’t make up, gay Republicans, whose existence has indeed been proven, are apparently outing the Perry campaign pollster who called the whole idea “nuts.”

First, Warfield. Warfield’a claim to notoriety dates back to 1995, when he was serving as spokesman for Bob Dole’s ultimately disastrous presidential campaign. Dole smelled suspiciously like a moderate to the GOP conservatives of the time (he’d be branded a socialist now), and he needed to shore up his right-wing credentials. Warfield played, in Dave Weigel’s words, “a big role” in the campaign’s decision to return a donation from Log Cabin Republicans, the gay group. The contribution was a paltry $1, 000, but the message was worth a million bucks: Dole was siding with religious conservatives who opposed any form of gay rights.

This tactic worked so well with Dole (although you will note that we don’t refer to Bob as “former president Dole”) that Warfield apparently decided to trot out his bag of anti-gay tricks for the Perry campaign. Perry is desperate to prove to Iowa evangelicals that he is one of them, and the ham-fistedness of the ad toward that aim has made it the endless target of parody that will do nothing to halt his downward trajectory. But it did open up a rift within the campaign.

Tony Fabrizio, Perry’s  pollster, sent Warfield a message to say that the ad was “nuts”–as anyone who has seen it will attest. Fabrizio has done polling for Log Cabin Republicans, so everyone in the Perry campaign knew he was, shall we say, sympatico. “Tony was against it from the get-go,” Warfield declared. “It was the source of some extended conversation in the campaign. To be very clear: That spot was mine, from writing the poll question to test[ing] it, to drafting the script, to overseeing production.” (Credit duly noted and not to be forgotten.)

So, okay, some internal squabbling in a failing campaign is good for a short news cycle, but wait!–there’s more. GOProud’s Jimmy LaSalvia blew a less-than-140-character gasket on Twitter, complaining that “I’ve just about had it with faggots who line their pockets with checks from anti-gay homophobes while throwing the rest of us under the bus.” And just in case you were wondering who LaSalvia was talking about, he subsequently tweeted “I was talking about Rick Perry’s pollster/strategist.” Thanks for clearing that up, Jimmy. And, by the way, there were similar complaints about Dole campaign staffers back in 1995. Some might wonder why LaSalvia continues to work within a political party that has been running us over with a fleet of buses for, well, decades now.

To recap: we have a homophobic ad from a punch-line candidate that recycles a strategy from a failed campaign and is objected to by a campaign adviser who is subsequently outed by fellow gay Republicans, who calls the fellow enable a “faggot.” We can hardly wait to see what the next news cycle brings.