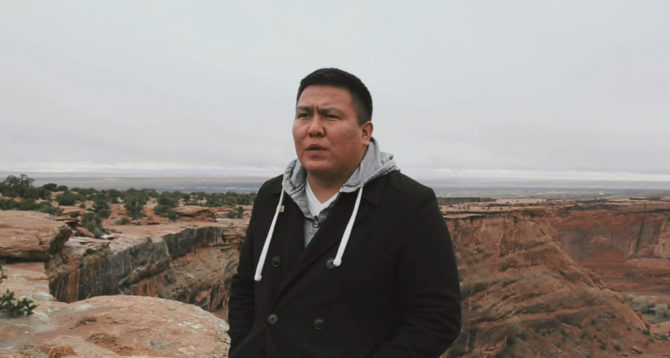 Amid the chaos of the current political process in the United States, a new call for marriage equality rises.

Alray Nelson, 32, and his boyfriend Brennen Yonnie, 33, want to get married. The problem: the two live on an Indian Reservation governed by the Navajo Nation. Despite the Supreme Court ruling in 2015 that legalized marriage equality, territories governed by the Navajo Nation still have a 2005 same-sex marriage ban on the books. Though the US government exerts a good deal of influence over reservation territories, tribes living on the land still follow law set by their own governments.

About 350,000 people live in the Navajo Nation, and rates of suicide among LGBTQ people are on the rise, especially among younger people. Alray Nelson, one of the most prominent Native American queer rights activists, believes legalizing marriage equality within the Navajo Nation could help to reduce that risk.

Related: Native American Gay Couple Are The First To Marry In Their Tribe

“Navajo youth who identify as LGBTQ are eight times more likely to take their own lives than a white youth,” Nelson told the Australian news outlet SBS News. “There’s a real threat right now for our young people to be part of this lost generation.”

Navajo elections coincide with the United States midterms, and fortunately, leading politicians have come out in support of marriage equality. Both Navajo presidential front-runner Joe Shirley, Jr. and his opponent Jonathan Nez have said they favor repeal of the law. Both have also said they will make repeal a top priority if elected.

“We have been fighting this for quite some time and to finally receive it would be closure on my end,” said Yonnie, who remains optimistic about the election outcome. The Navajo Nation currently occupies land in Arizona, New Mexico and Utah.